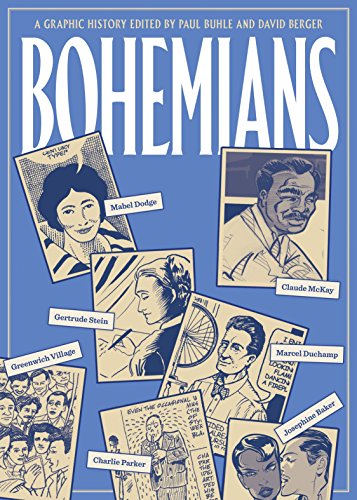 "This collection of marvelously drawn stories pays tribute to the free thinkers who've moved against society's grain and turned their backs on convention. Engaging, informative, and inspiring." - Joe Sacco, author of Palestine "Words become graphic and the graphics bring Bohemia alive in this wonderful history by Buhle and Berger. There is nothing worse than being severed from one's own roots, as demonstrated by decades of identity movements, there is nothing worse than being stripped of one's heritage, unless it's the theft of identity by thieving oppressors. This graphic anthology beautifully reconstructs the roots of America's counter-culture from the lost stories of men and women, blacks and whites, gay and straight who were the original refuseniks of Bohemia. I can't wait for more." - Tom Hayden "Disaffected wealth looking for fun, imaginative outsiders wanting a voice, reaching across and within ideology, dreams, expression and desires. Great intro to an American century of influences, individuals and scenes producing ideas for the future to engage." - Sarah Schulman, author of The Gentrification of the Mind "Once again, Paul Buhle has assembled a stellar group of writers and cartoonists to illuminate a subject often ignored by the wider pop-obsessed culture. The stories in Bohemians: A Graphic History bristle with real-life energy and detail, bringing this slice of history to vibrant life. The tale of Yosl Cutler's radical Yiddish puppets by Joel Schechter (featuring Spain Rodriguez's last published work, with an assist by Jay Kinney), is worth the price of admission alone." - Bill Griffith, creator of Zippy the Pinhead "Delightful, witty, and informative, Bohemians is a bar-raising performance in the genre of graphic histories - a comic-art volume that narrates a complicated story of race, sex, and rebellion with great aplomb to provide portraits that are candid and humane." - Alan M. Wald, author of The New York Intellectuals "A terrific appraisal of culture's gypsies, tramps and thieves, worthy of the editors' judgment: "Obituaries for bohemia have, in short, always been premature."" - Kirkus Reviews "Both a visual treat and an edifying look at alternative culture." - Library Journal

The nineteenth-century countercultures that came to define the bohemian lifestyle spanned both sides of the Atlantic, ranging from Walt Whitman to Josephine Baker, and from Gertrude Stein to Thelonius Monk. Bohemians is the graphic history of this movement and its illustrious figures, recovering the utopian ideas behind millennial communities, and covering the rise of Greenwich Village, the multiracial and radical jazz world, and West Coast and Midwest bohemians, among other scenes. Drawn by an all-star cast of comics artists, including rising figures like Sabrina Jones, Lance Tooks, and Summer McClinton, alongside established artists like Peter Kuper and Spain Rodriguez, Bohemians is a broad and entertaining account of the rebel impulse in American cultural history. featuring work by Spain Rodriguez, Sharon Rudahl, Peter Kuper, Sabrina Jones, David Lasky, Afua Richardson, Lance Tooks, Milton Knight, and others. The ebook edition is expanded from the paperback edition, and includes additional chapters on the swing music scene, La Boheme and midwest bohemians, as well as expanded material on the Greenwich Village intellectuals, Walt Whitman and Harlem jazz club Minton's Playhouse.