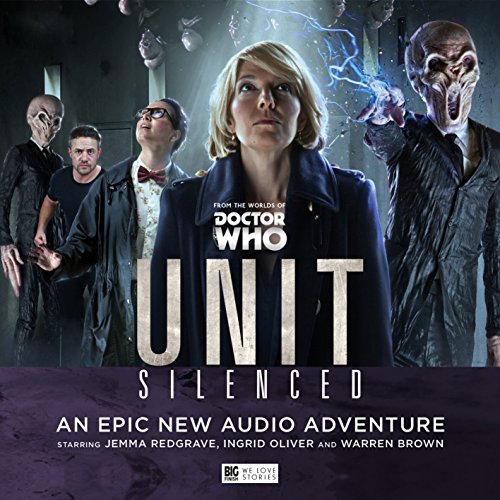 Kate Stewart and her UNIT team investigate and confront alien attacks on the planet Earth in the new 5 disc boxset. Decades after their defeat by the Eleventh Doctor, the Silence prepare to rise against humanity. . 1. House of Silents. There is no record of the presence of an alien species known as 'The Silents' on Earth. UNIT has never engaged hostiles capable of editing themselves from observers' memories. There is no evidence that such an opponent, if real, is regrouping and beginning a new plan of infiltration and manipulation. Kate Stewart and her team are in no mortal danger. How can they be, when they don't even know the enemy exists? 2. Square One. It's business as usual at UNIT, and thankfully, Kate Stewart has no immediate threats to concern her. Or so she believes. But when Sam Bishop returns from leave, he notices things aren't quite as they seem. Soon he and Osgood are on the trail of an elusive enemy. Meanwhile, Kenneth LeBlanc and his controversial political movement gather momentum, and one UNIT team member isn't quite themselves...3. Silent Majority. Kenneth LeBlanc looks set to lead his party to national victory, overturning political opinion and taking the polls by storm. UNIT can only stand and watch as a silent revolution takes place. But who are LeBlanc's real backers? And what use to them is the triumph of a leader who seems to be nothing more than a liability? The Silents are about to make the headlines. 4. In Memory Alone. When Sam Bishop and Osgood visit an orbiting space station for a routine mission, they have no idea that they are part of an alien scheme, years in the planning. As the global situation spins out of control, Kate seeks help from an unlikely source. The Silents are not done with humanity yet - and they will have their revenge. Launching with last year's Extinction, UNIT - The New Series was the first Big Finish range to use characters from the BBC mega-hit 21st century relaunching of Doctor Who! Jemma Redgrave reprises the character of Kate Stewart as seen on TV in stories such as the globally cinema-screened Doctor Who - Day of the Doctor. Ingrid Oliver reprises fan-favourite character Osgood - as seen in last year's Zygon two-parter of TV's Doctor Who. The Silence are one of the most popular monsters in the new series of Doctor Who - ghastly figures you instantly forget the moment you can't see them. Starring in this thrilling full-cast audio with cinematic sound design and music are: Jemma Redgrave (Kate Stewart), Ingrid Oliver (Petronella Osgood), Warren Brown (Lieutenant Sam Bishop), James Joyce (Captain Josh Carter), Ramon Tikaram (Colonel Shindi), Tracy Wiles (Jacqui McGee), Joanna Wake (Miss Faversham), Nicholas Day (Kenneth Leblanc/Heston), Tom Alexander (Cecil/Derek), Aaron Neil (Homeless Man/News Reporter/David), Nimmy March (Baroness Vance/Telokni), John Banks (Mission Control/Captain/Soldier) and Nicholas Briggs as The Silence.

Buchbeschreibung Big Finish Productions Ltd, 2017. Audio CD. Zustand: Good. Audio book. Good condition is defined as: a copy that has been read but remains in clean condition. All of the pages are intact and the cover is intact and the spine may show signs of wear. The book may have minor markings which are not specifically mentioned. Most items will be dispatched the same or the next working day. Bestandsnummer des Verkäufers mon0015661162