Verwandte Artikel zu Warships from the Golden Age of Steam: An Illustrated... 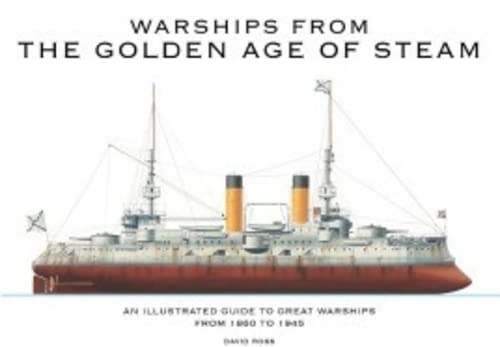 The great era of the steam warship was from the mid-1860s to the mid-1940s-an 80-year period in which a huge variety of large ships was built, ever-greater in size, fire-power, and technical sophistication. Capital ships were the most expensive and destructive weaponry prior to the atomic bomb, and their development can be traced decade by decade. Arranged in chronological order, Warships from the Golden Age of Steam provides concise coverage of the most famous warships of the period, including HMS Devastation, the first seagoing turreted ship; the Chinese Ting Yuen, sunk at the Battle of Wei-Hai-Wei in 1894; Mikasa and Retvizan, which fought each other at the Battle of the Yellow Sea in 1904; HMS Indomitable, Nassau, and HMS Lion, which all fought at the Battle of Jutland in 1916; HMS Prince of Wales, which took part in the hunt for the Bismarck, and was eventually sunk by Japanese air attack off the coast of Malaya in December 1941; and the Tirpitz, which remained a constant threat to Allied shipping in the North Atlantic until it was sunk by aerial bombers in a Norwegian fjord in late 1944. Filled with colorful artworks, expertly-written background text, and useful specifications of 100 warships, Warships from the Golden Age of Steam is a visually lavish guide to major fighting ships from 1860 to 1945.

David Ross specialises in maritime and railway history and has written and contributed to numerous books on these subjects. His most recent books are Ships Visual Encyclopedia, The Essential Naval Identification Guide: Submarines 1914-Present, Great Warships and The World's Greatest Battleships.

Buchbeschreibung Amber Books, 2014. Zustand: Good. A+ Customer service! Satisfaction Guaranteed! Book is in Used-Good condition. Pages and cover are clean and intact. Used items may not include supplementary materials such as CDs or access codes. May show signs of minor shelf wear and contain limited notes and highlighting. Bestandsnummer des Verkäufers 1782741534-2-4

Buchbeschreibung Amber Books, 2014. Hardcover. Zustand: GOOD. Has little wear to the cover and pages. Contains some markings such as highlighting and writing. Bestandsnummer des Verkäufers 1782741534_abe_gd

6. Warships from the Golden Age of Steam

8. Warships from the Golden Age of Steam

Buchbeschreibung Amber Books Ltd, South Africa, 2014. Hardcover. Zustand: Near Fine. Zustand des Schutzumschlags: Near Fine. First Edition (UK). 1st UK printing. Firmly bound and very carefully read. The book is in excellent clean condition with a couple of very minor bumps to the top edge of the hard cover. No inscription or ownership markings. No tears or loss. The jacket is clean but has a small corner tears & some light edge wear but no loss. Illustrated in colour. A heavy book. Bestandsnummer des Verkäufers 030932