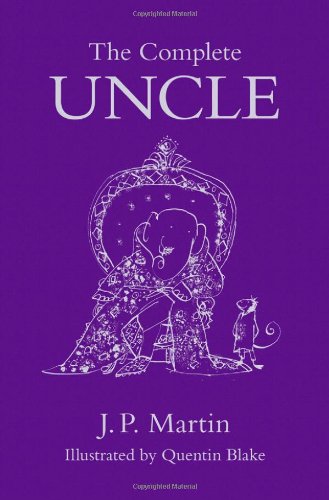 "AMAZING. It will be a fantastic book" -- Neil Gaiman "I think Uncle stuck with me because of its combination of excess, gadgetry and eccentricity - all of which are modes of being I have attempted to emulate in my adult life. I blame J.P. Martin." -- Will Self "Uncle is an utterly indulgent book, which veers recklessly between the childish and the sophisticated: it is violent, anar-chic and soft-hearted." -- Kate Summerscale "A riot of nonsense and adventure, may well become a classic in the great English nonsense tradition." -- Observer "You ask any class 'Who's heard of Alice in Wonderland ' and up goes a forest of hands. Uncle is on the same level and should be more widely read and enjoyed." -- Junior Bookshelf Magazine

The complete set of Uncle books, by J.P Martin and illustrated by Sir Quentin Blake, is being re-published in a deluxe high-quality hardback, with a wealth of extra material, including articles by Neil Gaiman, Will Self and Kate Summerscale. Uncle is an kind-hearted elephant who lives in an endlessly massive castle, accompanied by his motley crew of companions and employees, including the Old Monkey, Goodman the Cat, the One-Armed Badger and many more. Near his castle sits Badfort, home of Uncle's enemies, a disreputable group including Hateman, Jellytussle, Hitmouse and other unpleasant characters. Over the course of the books, Uncle and his followers find themselves mixed up with camels, dwarfs, treacle, bears, ghosts, a walrus, a singing flower, wizards, Respectable Horses and much, much more. Although the books were intended for children, they are loved by an adult audience for their wordplay, subversive and surreal humour and wonderful drawings. They are one of the great forgotten treasures of children's literature, and this is the first opportunity to buy the complete set since the early seventies. This deluxe 800-page hardback edition contains the full text of all six books, and all of the illustrations from Sir Quentin Blake. There are also articles by famous fans, contemporary reviews, an eight-page colour section showcasing the original cover art and much more. The anthology includes: Uncle, Uncle Cleans Up, Uncle and His Detective, Uncle and the Treacle Trouble, Uncle and Claudius the Camel, and Uncle and the Battle for Badgertown.