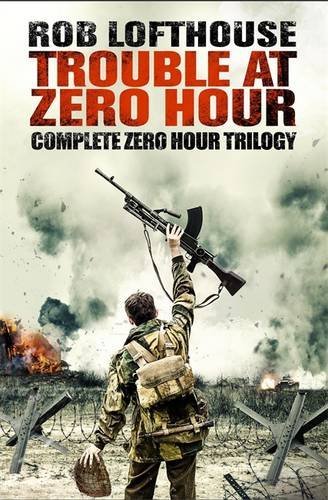 Written by a retired British soldier, Trouble at Zero Hour is a breathless and vivid story, dramatizing three of the key Allied operations that turned the tide of the Second World War.

6 June, 1944, somewhere over the Normandy coastline: Robbie Stokes sits in a glider, his Bren resting on the floor between his outstretched legs. The nose lowers and the glider descends rapidly: ten minutes of stomach-churning twists and turns until suddenly the call goes up to 'BRACE'. The belly makes contact with the ground and the first Allied troops tumble out into occupied Europe.

For new recruit Robbie Stokes it is the beginning of ten months of brutal and relentless conflict that take him from D-Day, via Operation Market Garden and the battle for Arnhem Bridge, to the Rhine Crossing and the final push for victory. Three operations that change the course of the war and test Robbie Stokes and his band of brothers to their limits. If they fail, then the Allied invasion fails. They must succeed through their longest days.

Robert Lofthouse was born in Twickenham and joined his local county infantry regiment (1 PWRR) straight from school at the age of sixteen. After serving 20 years, having served in Poland, Germany, Kenya, Canada, Falkland Islands, Iraq, Northern Ireland, and Kosovo, he retired in the rank of Sergeant.
He now works as a defence consultant and lives in Portsmouth with his wife and three children.