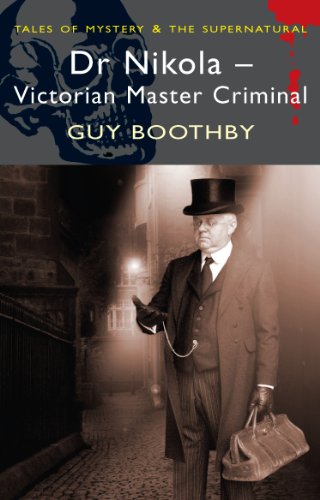 Elegant, ruthless, hypnotic: enter Dr Nikola and his black cat Apollyon. He was the world's first master villain, a Victorian forerunner of Dr Fu Manchu and the mad cat-stroking evil genius Blofeld in the James Bond books and films. Now Dr Nikola is back, wielding his sinister powers across the globe. In England, Egypt, Australia, Tibet, he pursues a priceless holy relic that will help him achieve his ultimate goal: immortality. Whether giving orders to his henchmen, suave in an evening suit in a private London restaurant, or languidly interrogating his prisoners in his secret torture chamber, Dr Nikola is always at his ease. And even when, by some mischance, his plans are temporarily thwarted, Dr Nikola manages to return, his implacable dark eyes drawing you to obey his will...Here you will find his two greatest adventures, the vintage Victorian thrillers A Bid for Fortune (1895) and Dr Nikola (1896) in one breathless, pacy, nightmarish volume. Created by Anglo-Australian novelist Guy Boothby, these books won praise from Rudyard Kipling and George Orwell. Dr Nikola is a character you will not be able to forget. 'Frank sensationalism carried to its furthest limits' (The Times, 1905)