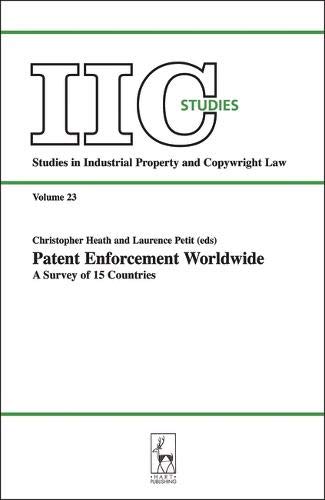 ...covers a subject that is of keen interest to patent lawyers, IP academics, economists, global development gurus and innovation experts...the chapters are written by authors whose opinions are worth reading... Professor Jeremy Phillips European Intellectual Property Review, Vol 28, Issue 10 Oct 2006 ...up to date books on patent enforcement with the international scope of the present volume are rare...a series of excellent chapters by acknowledged experts...Whether readers are interested in comparative IP law, public policy or practicing patent enforcement they will find this an interesting book. The first edition was a success and the second edition should be as, if not more, successful. Robert Pitkethly Global Law Books April 2006

Patent infringement procedures are an instrument whereby the patentee defends his protected invention against unlawful use by a third party (the alleged infringer). The difficulty is that the patent is no solid object whose damage can be easily detected; it belongs to that group of rights whose infringement is not easy to determine. The patent is a right described by words, and those words, written into a claim, are so complicated that laymen and lawyers alike fail to understand them. This is the special feature which distinguishes the patent right. This book consists of a series of country reports in which expert patent attorneys describe the patent infringement procedures in their jurisdiction. Since the first edition of this book was published in 2000, developments in the field of patent enforcement have been significant and required a major rewriting of all the seven original contributions (the UK, Germany, France, the Netherlands, Italy, Japan and the US): more than 100 decisions have been added. For the second edition, another eight countries have been included: three from Eastern Europe (Poland, the Czech Republic and Hungary), two from Asia (China and Korea), two from Latin America (Argentina and Brazil), and one from Europe (Switzerland) and there is a new chapter by Dieter Stauder on European issues of patent enforcement: cross-border litigation, cross-border assistance in obtaining evidence, and the new European Enforcement Directive.

2. Patent Enforcement Worldwide: A Survey of 15 Countries: Essays in Honour of Dieter Stauder