Colapinto About the Author [Idioma Inglés]

About the Author [Idioma Inglés] 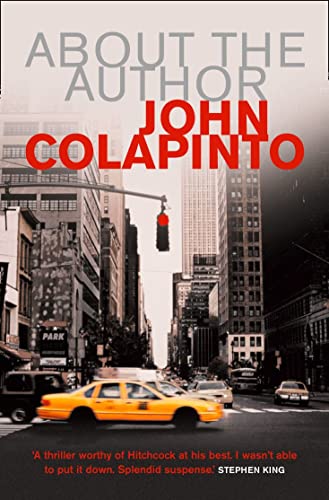 ‘A Perfect novel...not only a devastatingly witty satire on American literary life but also a thriller of which Patricia Highsmith would have been proud.’ The Sunday Times

‘Blackly comic thriller and a sly, spot-on satire of Bookbiz hoopla.’ The Times

‘A thriller worthy of Hitchcock at his best. I wasn’t able to put it down. Splendid suspense.’ Stephen King

‘It is enormously, compulsively readable...the book is difficult to stop reading.’ Spectator

‘It will satisfy readers who want to know what’s new in literary fiction as well as those seeking the comforts of a well-told reader.’ Guardian

A wickedly funny psychological thriller about literary ambition, envy and the lengths an author will go to get on the bestsellers list.

Cal Cunningham dreams of writing an autobiographical novel that will help him escape from his life as a penniless bookstore stockboy in upper Manhattan. Yet, after two years of living together, it is Stewart, Cal’s studious flatmate who has finished writing a page-turning novel – based on Cal’s life.

When a timely, fatal bicycle accident removes Stewart from the scene, Cal appropriates the manuscript as his own and places it in the hands of the legendarily ferocious literary agent Blackie Yeager.

Soon Cal realises his most outlandish fantasies of literary success. That is, until he discovers that someone knows his secret. For Cal, this means plotting not just his second novel, but also his first murder.