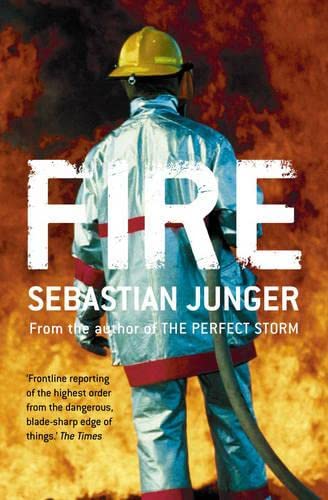 'This is frontline reporting of the highest order from the dangerous, blade-sharp edge of things.' The Times

'His language, as powerful as the most abrasive undercurrent, describes an exceptional tug of war with the elements.' Alex O'Connell, The Times

'He writes like a poet who has been to meteorology school.' Ruth Rendell, Daily Telegraph

'Detail blazes through these chapters like the fiercest fire storm, yet the writing is invariably controlled, never breathless...Junger is an excellent story teller.' Sunday Telegraph

PRAISE FOR THE PERFECT STORM:

'Junger moves seamlessly between the wrenching human dramas and the awesome details of the storm. Terrifying, exhilarating, humbling and unforgettable.' Daily Mail

'It will become a classic for the jaded modern world...it confirms your wildest hopes of quiet heroism as well as your greatest fears.' Independent

Forest fires, terrorism, war: thrilling adventure writing, as the bestselling author of THE PERFECT STORM brings his talents for exhilaration to new and overawing life-threatening situations.

The millions of readers and viewers of The Perfect Storm have long awaited this new work of non-fiction by Sebastian Junger. This time, we step off the deck of the Andrea Gail into an inferno. Here is the same enthralling prose brought to bear on the inner workings of a terrifying elemental force; here is a cast of characters ready to risk everything in the effort to bring that force under control.

Few writers have been to so many desperate corners of the world as Sebastian Junger, fewer still have provided such starkly memorable evocations of characters and events. From the murderous mechanics of the diamond trade in Sierra Leone and a deadly canyon fire in Idaho to guerilla warfare in Afghanistan and the forensics of genocide in Kosovo, Fire will take you where you wouldn't dream of going on your own.

Gebraucht kaufen
Zustand: Befriedigend
A copy that has been read, but... Mehr zu diesem Angebot erfahren

Buchbeschreibung FOURTH ESTATE. Paperback. Zustand: Good. A copy that has been read, but remains in clean condition. All pages are intact, and the cover is intact. The spine may show signs of wear. Pages can include limited notes and highlighting, and the copy can include previous owner inscriptions. At ThriftBooks, our motto is: Read More, Spend Less. Bestandsnummer des Verkäufers G1841157333I3N00

Buchbeschreibung FOURTH ESTATE. Paperback. Zustand: Fair. A readable copy. All pages are intact, and the cover is intact. Pages can include considerable notes-in pen or highlighter-but the notes cannot obscure the text. At ThriftBooks, our motto is: Read More, Spend Less. Bestandsnummer des Verkäufers G1841157333I5N00

Buchbeschreibung Paperback. Zustand: Very Good. The book has been read, but is in excellent condition. Pages are intact and not marred by notes or highlighting. The spine remains undamaged. Bestandsnummer des Verkäufers GOR001977373