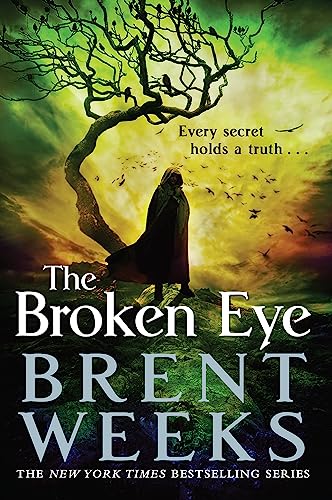 Brent Weeks is so good it's starting to tick me off (Peter V. Brett)

Places Brent Weeks on comfortable footing beside contemporaries like Brandon Sanderson and Joe Abercrombie, if not a step above (A DRIBBLE OF INK on THE BLINDING KNIFE)

The third book in the Lightbringer series, the blockbuster fantasy epic from international bestseller Brent Weeks

As the old gods awaken and satrapies splinter, the Chromeria races to find the only man who might still end a civil war before it engulfs the known world. But Gavin Guile has been captured by an old enemy and enslaved on a pirate galley. Worse still, Gavin has lost more than his powers as Prism - he can't use magic at all.

Without the protection of his father, Kip Guile will face a master of shadows as his grandfather moves to choose a new Prism and put himself in power. With Teia and Karris, Kip will have to use all his wits to survive a secret war between noble houses, religious factions, rebels and an ascendant order of hidden assassins called The Broken Eye.

'Brent Weeks is so good it's beginning to tick me off' Peter V. Brett

'Weeks has a style of immediacy and detail that pulls the reader relentlessly into the story. He doesn't allow you to look away' Robin Hobb

'I was mesmerised from start to finish. Unforgettable characters, a plot that kept me guessing, non-stop action and the kind of in-depth storytelling that makes me admire a writers' work' Terry Brooks

1. The Broken Eye: Book 3 of Lightbringer

Buchbeschreibung 2015. Paperback. Zustand: New. Paperback. As the old gods awaken, the Chromeria is in a race to find its lost Prism, the only man who may be able to stop catastrophe, Gavin Guile. But Gavin's enslaved on a galley, and when he fina.Shipping may be from multiple locations in the US or from the UK, depending on stock availability. 912 pages. 0.620. Bestandsnummer des Verkäufers 9781841499116

4. The Broken Eye: Book 3 of Lightbringer

8. The Broken Eye: Book 3 of Lightbringer

9. The Broken Eye: Book 3 of Lightbringer