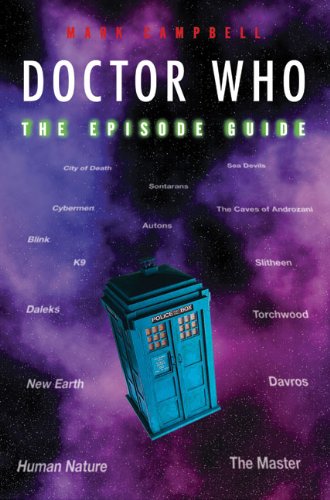 Reseńa del editor:
A successful new Who series has introduced a whole new generation to the joys of the beloved show, and this updated guide covers the more than 700 episodes and 10 different actors who have inhabited the role of the Doctor From humble beginnings to its cancellation in 1989 and eventual resurrection in 2005, Doctor Who has a long and colorful history. The spine-chilling theme music, the multi-dimensional Tardis, the evil metallic Daleks, and the ever-changing face of the Doctor himself are explored here as trademarks of the show's witty, eclectic house style. Over the years Doctor Who has embraced such diverse genres as science fiction, horror, westerns, history, romance, adventure, and comedy?but has never strayed from its first and most important remit: telling good stories. This new, updated edition puts the first 10 doctors under the microscope with facts, figures, and opinions on every Doctor Who story televised. There are sections on TV, radio, cinema, stage, and internet spin-offs; novels and audio adventures; missing episodes; and an extensive website listing and bibliography.
Biografía del autor:
Mark Campbell writes for the Independent and has produced Pocket Essentials on Sherlock Holmes, Agatha Christie, and Carry On Films. Kim Newmanis a contributing editor to Sight & Sound and Empire magazines and the author ofBFI TV Classics: Doctor Who. He is the author of The Secret Files of the Diogenes Club and Doctor Who: Time and Relative.