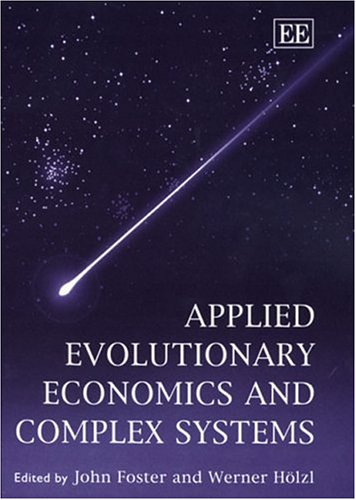 `Applied Evolutionary Economics and Complex Systems offers a rich set of contributions exploring the connections between evolutionary economics, complex system theory, and empirical research. It focusses on how the economy viewed as a system differs in important ways from natural contexts. Knowledge and information, the population approach, and the interdependence between selection and development through the creation and destruction of variety are the three distinguishing and interrelated traits of evolutionary economics. Technological and organizational change is emphasized, together with the implications of complexity and the open character of economic systems on the behavioural characteristics of economic agents and on the ability of economists to model the behaviour of complex systems. The book addresses the challenging task of explaining and understanding which rules govern the interactions between agents and which processes and interactions change the rules of the economic game over time thus enabling the system to evolve. This book helps clarify difficult issues although it is necessarily selective, exploratory and illustrative. It is an important contribution to building a repertoire of applied case studies of evolutionary economics and complex systems.' -- Robert Delorme, University of Paris/CEPREMAP, France `This book reflects the new level of maturity of evolutionary and institutional economics. The field of evolutionary economics has moved beyond merely describing the economy as an evolving complex system and is now developing empirically testable models of economic evolution. This book is a major contribution to the revolution now taking place in economic theory as traditional welfare economics is being replaced by more realistic models of human behavior and economic organisation.' -- John Gowdy, Rensselaer Polytechnic Institute, US `Statistical analogies and hypotheses testing now attract increasing attention in the evolutionary approach to economics. As much as evolutionary theorizing calls for new concepts to be able to go beyond static equilibrium analysis, as much does empirical work in evolutionary economics require an extension of the tool box of linear time series analysis and statistics. Foster and Hoelzl have brought together an excellent collection of papers highlighting both the broad range of problems facing such an extension and the possible solutions. The methodological studies and the practical applications in this volume represent a guide post for future empirical work in evolutionary economics.' -- Ulrich Witt, Max Planck Institute, Jena, Germany