Spitz, Bob The Beatles: The Biography

The Beatles: The Biography 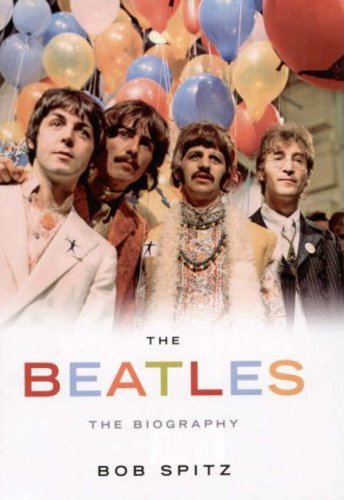 This massive new biography of the Beatles will undoubtedly become the definitive book on the band. Not only has the author conducted literally hundreds of interviews, sometimes with people who have never spoken before about their links with the Beatles, or have never spoken so candidly before; he has also told the story of their entire career, tour by tour, gig by gig, with an enthralling narrative drive. His re-creation, for example, of the Beatles' exhausting early years playing in Hamburg in Germany - performing set after set all night, every night, to often violent audiences, and living in squalid conditions at the mercy of rapacious promoters, is a tour de force. The book also casts new light on many aspects of a story, which, most people might assume has been done to death - especially by talking to the band members friends and family as well as all those musicians whose paths crossed with the Beatles over the years. Here is Ringo's boyhood best friend, George's first girlfriend, Paul's first serious love (never before interviewed), and every one of John's art school mates. Here is Terry Doran, the Apple executive and George's confidante, who has never before spoken about that era, and a whole host of archival material never before consulted. It will be an essential purchase for every Beatles lover.

Robert Spitz is the author of Dylan: a Biography and Barefoot in Babylon, about the legendary Woodstock music festival in 1969.

1. The Beatles: The Biography

Buchbeschreibung Paperback. Zustand: Good. The book has been read but remains in clean condition. All pages are intact and the cover is intact. Some minor wear to the spine. Bestandsnummer des Verkäufers GOR002989503

2. The "Beatles": The Biography

Buchbeschreibung Paperback. Zustand: Very Good. The book has been read, but is in excellent condition. Pages are intact and not marred by notes or highlighting. The spine remains undamaged. Bestandsnummer des Verkäufers GOR002186829

3. The "Beatles": The Biography

Buchbeschreibung Paperback. Zustand: Fair. A readable copy of the book which may include some defects such as highlighting and notes. Cover and pages may be creased and show discolouration. Bestandsnummer des Verkäufers GOR006582622

4. The "Beatles": The Biography

Buchbeschreibung Aurum Press Ltd, 2007. Paperback. Zustand: Used; Good. **SHIPPED FROM UK** We believe you will be completely satisfied with our quick and reliable service. All orders are dispatched as swiftly as possible! Buy with confidence!. Bestandsnummer des Verkäufers mon0000462791

5. The Beatles: The Biography

Buchbeschreibung Aurum Press 2007-04-25, 2007. Paperback. Zustand: Very Good. All books are pre-owned and will have been read by someone else before you. They may well show signs of minor wear and tear. Please note, cover images are illustrative only, and the actual book cover and edition can vary. Bestandsnummer des Verkäufers 9781845132330-21

6. The "Beatles": The Biography

Buchbeschreibung Aurum Press Ltd, 2007. Paperback. Zustand: Used; Good. **Simply Brit** Shipped with Premium postal service within 24 hours from the UK with impressive delivery time. We have dispatched from our book depository; items of good condition to over ten million satisfied customers worldwide. We are committed to providing you with reliable and efficient service at all times. Bestandsnummer des Verkäufers 1072127