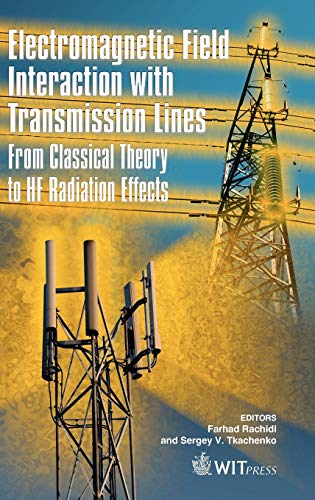 The evaluation of electromagnetic field coupling to transmission lines is an important problem in electromagnetic compatibility. Traditionally, use is made of the TL approximation which applies to uniform transmission lines with electrically small cross-sectional dimensions, where the dominant mode of propagation is TEM. Antenna-mode currents and higher-order modes appearing at higher frequencies are neglected in TL theory. The use of the TL approximation has permitted to solve a large range of problems (e.g. lightning and EMP interaction with power lines). However, the continual increase in operating frequency of products and higher frequency sources of disturbances (such as UWB systems) makes that the TL basic assumptions are no longer acceptable for a certain number of applications.In the last decade or so, the generalization of classical TL theory to take into account high frequency effects has emerged as an important topic of study in electromagnetic compatibility. This effort resulted in the elaboration of the so-called 'generlized' or 'full-wave' TL theory, which incorporates high frequency radiation effects, while keeping the relative simplicity of TL equations.This book is organized in two main parts. Part I presents consolidated knowledge of classical transmission line theory and different field-to-transmission line coupling models. Part II presents different approaches developed to generalize TL Theory.

Farhad Rachidi is the head of the Electromagnetic Compatibility (EMC) Group of of the Swiss Federal Institute of Technology (EPFL). He received the M.S. degree in electrical engineering and the Ph.D. degree from the Swiss Federal Institute of Technology, Lausanne, in 1986 and 1991 respectively. He worked at the Power Systems Laboratory of the same institute until 1996. In 1997, he joined the Lightning Research Laboratory of the University of Toronto in Canada and from April 1998 until September 1999, he was with Montena EMC in Switzerland. He is currently 'Maitre d'Enseignement et de Recherche' and head of the EMC Group at the Swiss Federal Institute of Technology, Lausanne, Switzerland. His research interests concern electromagnetic compatibility, lightning electromagnetics and electromagnetic field interactions with transmission lines. He is the convener of the joint CIGRE-CIRED Working Group "Protection of MV and LV Networks against Lightning", the Chairman of the subcommittee Lightning of the Technical Committee TC5 of IEEE EMC Society, and a member of various IEEE, CIGRE and CIRED working groups dealing with lightning. He is member of the Executive Board of the International Conference on Lightning Protection and member of the Scientific Committees of various International Symposia in the field of Electromagnetic Compatibility. Farhad Rachidi is a Senior Member of IEEE, Vice-Chair of the European COST Action P18 'The Physics of Lightning Flash and its Effects', Associate Editor of the IEEE Transactions on Electromagnetic Compatibility, member of the Editorial Board of the Journal of Lightning Research, member of the Editorial Board of Book Series on Advances in Electrical and Electronic Engineering, Wessex Institute of Technology (WIT) Press, member of the Editorial Board of Book Series on Lightning and its Effects, Elsevier Press, and member of the Electromagnetics Academy. He has served as Keynote speaker, session chairman/moderator/organizer at various international conferences in the field of Electromagnetic Compatibility and Lightning. He served also as a guest co-editor for the Journal of Electroctatics (2004 and 2006) and special reporter for CIGRE (2004). In 2005, he was the recipient of the IEEE Technical Achievement Award for outstanding contributions to the understanding of lightning discharge and its electromagnetic effects. He was also awarded with the 2005 Technical Committee Award of the CIGRE (International Council on Large Electric Systems). In July 2006, he was elected to the grade of EMP Fellow for his contributions to the coupling of electromagnetic fields radiated by lightning. Farhad Rachidi was awarded the 2006 Blondel Medal from the French Association of Electrical Engineering, Electronics, Information Technology and Communication (SEE). Farhad Rachidi is listed in Who's Who in Science and Engineering. He is the author or coauthor of over 200 scientific papers published in reviewed journals and presented at international conferences. Sergei Tkachenko is with the Institute for Fundamental Electrical Engineering and Electromagnetic Compatibility, at Otto-von-Guericke University, Magdeburg, Germany.