Hull, Graham Inside the Rolls-Royce & Bentley Styling Department 1971 to 2001

Inside the Rolls-Royce & Bentley Styling Department 1971 to 2001 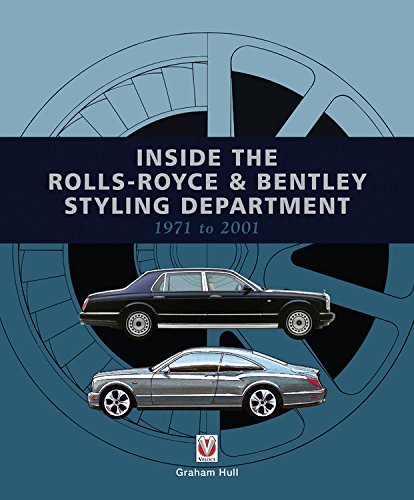 This is a well produced book with good illustrations ... to anyone with an interest in either marque, this book represents a new insightful approach from an interestingly different viewpoint, with some excellent renderings and illustrations along the way. BDC Review Books by stylists are fairly rare, and for such a famous company, comparatively little has been written in any context about the Rolls Royce and Bentley operation at Crewe, so Graham Hull's book is doubly welcome ... A fascinating account of how two of the most famous marques in the world were designed and built effectively by a cottage industry and one which, thanks to the needs-must school of ingenuity, survived into the twenty-first century. Kieron Fennelly A superb book! Oldtimer Magazine/ Dreamcar Magazine this is a useful reference as well as a fine read. Classic & Sports Car (UK) a really interesting read that shows just how much goes on behind the scenes! New Zealand Classic Car A long overdue book by pretty much the only person who could have written it. The Flying Lady This is the most interesting book on Rolls-Royce and the development of the cars ever printed. That's all you need to know. Get it for yourself and buy a copy for your buddy too. You won't be able to put it down. The Modern Car Funny, touching and immensely readable this book by Graham Hull offers a rare human glimpse into the pressured world behind the cold if starkly beautiful shiny metal exteriors of two of the world's most fought-over mechanical masterpieces. Thoroughly recommended. Lavishly illustrated and jolly good value for money. Big End A highly interesting insider report. British Classics. We're always intrigued by stories written by former Crewe workers, hence our interest in this hefty hardback written by the man who started out as an apprentice designer at Rolls-Royce and ended up as the company's chief stylist. It charts the personal progress of Graham Hull and the company he worked for over a thirty-year period. But more importantly it provides an insight into some of the fascinating design proposals, particularly from the 1980s onwards - when the potential of Bentley finally began to be realised after many years of neglect. It's a highly recommended title for anyone who enjoys reading about the company - and the people - behind the cars. - Rolls-Royce & Bentley Driver.

From a small design team working on the Silver Spirit/Mulsanne, to becoming Chief Stylist, Graham Hull peels back the curtain on an idiosyncratic institution during his time at Crewe. Throwing light on a factory motivated as much by pride, as the bottom-line, all the projects, whether production, special commission, or aborted designs, are covered, and the often unique styling process is explored. This process was a key element in the resurgence of the dormant Bentley marque, that, with its fortunes on the rise, became the star of the Geneva Motor Show, attracting commissions from wealthy enthusiasts for totally bespoke vehicles. Founding fathers Royce and Rolls melded engineering with marketing, but as marketing took over, this union fractured. The drama of how this British institution was divided between BMW and VW, and how aesthetic design, never cherished by British management, was increasingly recognised, is fundamental to the story. The bewildering number of projects during the 1990s is a genuine eye-opener and a phenomena that demanded unique peoples, skills, and facilities.