The Penguin Book of Classical Myths 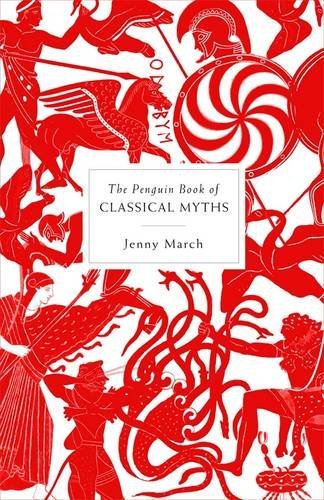 The figures and events of classical myths underpin our culture and the constellations named after them fill the night sky. Whether it’s the raging Minotaur trapped in the Cretan labyrinth or the twelve labours of Hercules, Aphrodite’s birth from the waves or Zeus visiting Danae as a shower of gold, the mythology of Greece and Rome is full of unforgettable stories. All the stories of the Greek tragedies – Oedipus, Medea, Antigone – are there; all the events of the Trojan wars and of Odysseus and Aeneas’ epic journeys; the founding of Athens and of Rome...

These are the strangest tales of love, war, betrayal and heroism ever told and, while brilliantly retelling them, this book shows how they echo through the works of much later writers from Chaucer and Shakespeare to Camus and Ted Hughes. Full of attractive illustrations and laid out in eighteen clear chapters (the titles include ‘Dangerous Women’ and ‘Heroes’), Dr Jennifer March has written a fascinating guide to the myths of classical civilization that is as readable as a novel.

This new guide looks at the gods and goddesses of Classical Mythology; at the nature of the religion in Ancient Greece, with its numerous deities and complex theogony, and at the oracles and priests who acted as a conduit between mortals and divine beings. Dr Jennifer March, a leading expert in the study of Classical Civilizations, explores and explains all the myths and legends, from the original swashbuckler Jason and his Argonauts to the dramatic escape from Crete of Daedalus and Icarus to the heart-wrenching tale of Orpheus and Eurydice. These stories that have informed and shaped our understanding of literature and are gathered together here in this erudite and intriguing volume.

1. The Penguin Book of Classical Myths

2. The Penguin Book of Classical Myths

3. The Penguin Book of Classical Myths

6. The Penguin Book of Classical Myths