Verwandte Artikel zu Atlas of Remote Islands: Fifty Islands I Have Not Visited...

Schalansky, Judith Atlas of Remote Islands: Fifty Islands I Have Not Visited and Never Will

Atlas of Remote Islands: Fifty Islands I Have Not Visited and Never Will 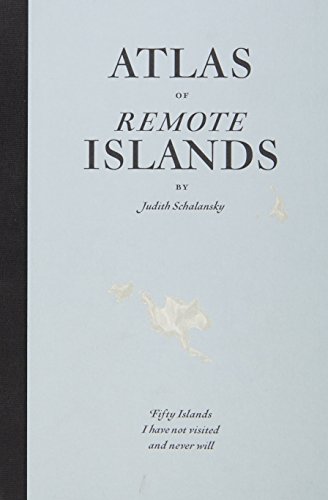 Tenderly tracing one finger over the maps, we lose ourselves in the beauty of filigree lines, points and letters. We smell the sea, hear the surf breaking, see icebergs and rocks and under our feet feel fine sand. Anyone who opens this, the most enchanting book of the autumn, is likely to get as lost as Robinson Crusoe for a while (Die Zeit)

An utterly exquisite object ... her book makes a magnificent case for the atlas to be recognised as literature, worthy of its original name - theatrum orbis terrarum, "the theatre of the world" (Robert Macfarlane Guardian)

So beautifully designed is this little caprice, so meticulous are its maps and so entertaining its matter (Jan Morris New York Times)

Judith Schalansky was born in 1980 on the wrong side of the Berlin Wall. The Soviets wouldn't let anyone travel so everything she learnt about the world came from her parents' battered old atlas. An acclaimed novelist and award-winning graphic designer, she has spent years creating this, her own imaginative atlas of the world's loneliest places. These islands are so difficult to reach that until the late 1990s more people had set foot on the moon than on Peter I Island in the Antarctic.

On one page are perfect maps, on the other unfold bizarre stories from the history of the islands themselves. Rare animals and strange people abound: from marooned slaves to lonely scientists, lost explorers to confused lighthouse keepers, mutinous sailors to forgotten castaways; a collection of Robinson Crusoes of all kinds. Recently awarded the prize of Germany's most beautiful book, the Atlas of Remote Islands is an intricately designed masterpiece that will delight maplovers everywhere. Judith Schalansky lures us across all the oceans of the world to fifty remote islands - from St Kilda to Easter Island and from Tristan da Cunha to Disappointment Island - and proves that some of the most memorable journeys can be taken by armchair travellers.

1. An Atlas of Remote Islands: Fifty Island I Have Not Visited and Never Will