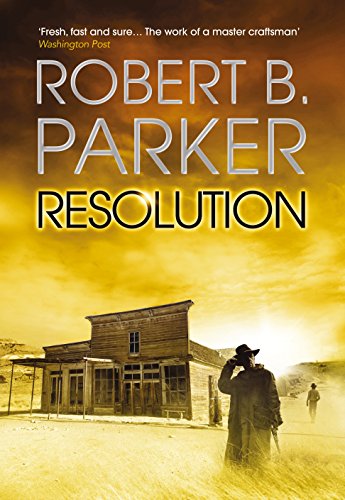 A sparse, bullet-ridden rumination on law and order * Publishers Weekly * Why Robert Parker is not better known in Britain is a mystery * Daily Mirror * An exercise in pure, old-fashioned storytelling... fresh, fast and sure... The work of a master craftsman * Washington Post * Where better than the Old West for [Parker's] terse, punchy dialogue; buddy-bond themes; and propulsive, rock-steady storytelling? * Booklist *

The dust has yet to settle in the new frontier town of Resolution. It's barely even a town: a general store, a handful of saloons and a run-down brothel for the workers at a nearby copper mine. No sheriff has been appointed, and gunslingers have taken control. Amid the chaos, itinerant lawman Everett Hitch has created a small haven of order at the Blackfoot Saloon. Charged with protecting the girls who work the back room, Hitch has seen off passing cowboys and violent punters - though it's his scheming boss, Amos Woolfson, who stirs up the most trouble. When a greedy mine owner threatens the local ranchers, Woolfson ends up at the centre of a makeshift war. Hitch knows only too well how to protect himself, but with the bloodshed mounting, he's relieved when his friend Virgil Cole rides into town. In a place where justice and order don't yet exist, Cole and Hitch must lay down the law - without violating their codes of honour, duty and friendship.

Buchbeschreibung Corvus, 2013. Hardcover. Zustand: Used; Good. Ex Library Copy **SHIPPED FROM UK** We believe you will be completely satisfied with our quick and reliable service. All orders are dispatched as swiftly as possible! Buy with confidence!. Bestandsnummer des Verkðufers 3677919

Buchbeschreibung Corvus, 2013. Hardcover. Zustand: Used; Good. Ex-library **Simply Brit** Shipped with Premium postal service within 24 hours from the UK with impressive delivery time. We have dispatched from our book depository; items of good condition to over ten million satisfied customers worldwide. We are committed to providing you with reliable and efficient service at all times. Bestandsnummer des Verkðufers 3044052

Buchbeschreibung Corvus 2011-03-01, 2011. Hardcover. Zustand: Good. Item is in good condition. Some moderate creases and wear. This item may not come with CDs or additional parts including access codes for textbooks. Might be an ex-library copy and contain writing/highlighting. Bestandsnummer des Verkðufers DS-1848873468-3

Buchbeschreibung Hardback. Zustand: Good. The book has been read but remains in clean condition. All pages are intact and the cover is intact. Some minor wear to the spine. Bestandsnummer des Verkðufers GOR006626363