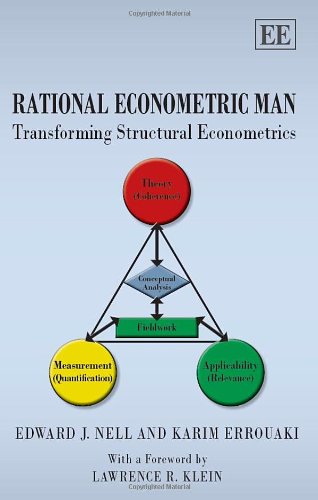 `This is a big book that presents big ideas and is well worth a read and re-read.' -- Richard Fowles, Eastern Economic Journal `This is a book macroeconomists were waiting for - a lucid history of macroeconometric model building. A must read.' -- Willi Semmler, New School for Social Research, US `Rational Econometric Man is an important book regarding an under-discussed subject. . . I would urge anyone with an interest in econometrics to read this book and so better understand what it is that they are doing and what it is that they could do.' -- Jamie Morgan, Real-World Economics Review `The authors have succeeded in orchestrating a lively debate over the scientific foundations of structural econometrics. Their book deserves a broad readership.' -- From the foreword by Lawrence R. Klein `The wide range of issues brilliantly discussed, the entertaining and accessible language, the sharpness of the authors' judgement and the constructive critical mood makes this book recommended reading for anyone who feels uneasy with the empirical scope and policy significance of standard econometric methods and of mainstream economic models.' -- Alessandro Vercelli, University of Siena, Italy `This book represents a bold and imaginative attempt to reconsider the philosophical foundations of econometrics by re-evaluating the Cowles Commission project of the 1940s and its subsequent influence on modern econometrics. The re-evaluation is based on the Hollis and Nell (1975) perspective, but refocused on econometrics (instead of economics), and inspired by a novel re-reading of Haavelmo's work in econometrics. Irrespective of whether one agrees with the authors' evaluation and their reconstruction of the philosophical foundations of econometrics, the book offers a unique opportunity to commence a serious dialogue on how econometrics can provide sound empirical foundations for economics and what such foundations will amount to. The authors raise several crucial issues pertaining to the current practice of econometrics whose constructive discussion can lead to better empirical modelling practices that can hopefully elucidate how the economy works and how to improve its performance. This reconsideration is timely because despite the impressive technical advances, most of the foundational problems bedevilling current econometric modelling remain largely unresolved.' -- Aris Spanos, Virginia Tech, US `If you are interested in understanding the underlying philosophical reasons why structural econometrics seems dead, read this book. Not only do the authors provide a comprehensive, stimulating and provocative account of the debate and literature, they also provide insightful suggestions for improving the bridge over the theory-data gap in economics. Their main suggestion that theorists and econometricians should do more fieldwork to improve not only economic theories but also econometric models is a refreshing breeze of intellectual honesty in a world where the relationship between the theorist and the econometrician has grown stale.' -- George C. Davis, Virginia Tech, US

This challenging and original book takes a fresh, innovative look at econometrics, and re-examines the scientific standing of structural econometrics as developed by the founders (Frisch and Tinbergen) and extended by Haavelmo and the Cowles modellers (particularly Klein) during the period 1930-1960. The authors begin by rethinking the scientific foundations of structural econometrics, offering a way around the problem of induction that also justifies the assumption of a `data generating mechanism', and of ways to model this. They go on to explain how current critiques of the methodological foundations of structural econometrics are direct consequences of implicitly accepted but seriously flawed elements in neoclassical thinking. In the final part they present their distinctive methodological contribution: a blend of fieldwork and conceptual analysis designed to ensure that their models are well grounded in reality, and at the same time, conceptually coherent as well as statistically adequate. In so doing, they outline a number of elements that will be needed to develop a `good' macroeconometric model of an advanced economy. Rational Econometric Man will prove a stimulating and thought-provoking read for scholars and researchers in the field of economics, and, more specifically, heterodox economics.