Famous Figures and Diagrams in Economics

Famous Figures and Diagrams in Economics 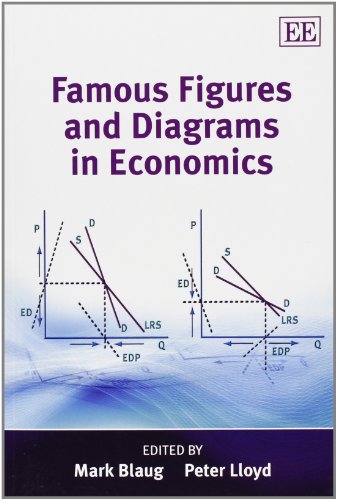 `. . . the book is a marvellous achievement and a major contribution to the history of economic thought. . . The book provides a genuinely interesting perspective on the development of modern economics. Each diagram illustrates a single analytical point, but there is a cumulative logic to the exposition of the various diagrams that reproduce the main turns in the development of modern economic theory. So reading the book cover-to-cover is an excellent way of working through the logic of the discipline. . . Famous Figures and Diagrams in Economics is a major contribution to the history of economic thought and repays close study by anyone who wants to have a better understanding of how economists reason.' -- Daniel Little, Journal of Economic Methodology `. . . there is much of interest in this volume. . . The study under review makes for enjoyable reading for those who either have drawn economic diagrams on the blackboard as part of their teaching, or, for that matter, for those who as students recall painful inability to understand the point of the diagram, so carefully constructed on the blackboard by one of their teachers.' -- Peter Groenewegen, History of Economics Review `A picture is said to be worth a thousand words. A picture can easily be worth two or three equations, and it is certainly more memorable. I can draw and use an Edgeworth box more quickly than I can write down its formulas. There is a vast amount of economics packed into the 58 diagrams and expert commentaries in this unique book. Take it with you to your favourite desert island. All you need is a sandy beach and a pointed stick.' -- Robert Solow, Massachusetts Institute of Technology, US `This book is a goldmine of information and interpretation for historians of economics, and thoughtful economists of all kinds. The origin and evolution of important figures and diagrams in economics will now be instantly at their fingertips. The authors of the entries are a galaxy of distinguished economists and historians whose accounts can be trusted. One must ask why no one has put together such a collection before.' -- Craufurd Goodwin, Duke University, US `Economics relies on verbal reasoning, geometry and formal mathematics. Advances and insights in the subject come in all these ways. This splendid book shows the power of geometric analysis, which I have favoured in my own work, drawing on several famous diagrams that have made their way into the literature. It is a book to be savoured and learnt from.' -- Jagdish Bhagwati, Columbia University, US `Here is a feast of diagrams, presented by many expert authors in a context of history of thought. It will be very useful for researchers, students and textbook writers.' -- Max Corden, University of Melbourne, Australia `Francis Collins oversaw the human genome project. Mark Blaug and Peter Lloyd have done the same for economics, demonstrating that figures and diagrams are the DNA building blocks of the discipline. This book has them all: backward-bending labor supply, cobweb diagram, circular flow, production possibility frontier, Stolper-Samuelson box, IS/LM, the Phillips curve and many more. Each is portrayed, its importance explained, its origin revealed, and the reader often encounters Stigler's Law of Eponymy (No scientific discovery is named after its original discoverer).' -- Kenneth G. Elzinga, University of Virginia, US `Both students and professors will welcome this original and unique collection. Analytically tighter and more complete expositions than much existing literature should be very welcome in graduate theory courses. Authors of history of economic thought texts will have to clarify and correct the historical record regarding who said what and when, and both reconfigure the assignment of credit and question use of the term "precursor": early users did more than hint at the full development; often creating tools.' -- Warren Samuels, Michigan State University, US

This is a unique account of the role played by 58 figures and diagrams commonly used in economic theory. These cover a large part of mainstream economic analysis, both microeconomics and macroeconomics and also general equilibrium theory. The authoritative contributors have produced a well-considered and definitive selection including some from empirical research such as the Phillips curve, the Kuznets curve and the Lorenz curve. Almost all of them are still found in contemporary textbooks and research. Each entry presents an accurate and concise record of the history of the figure or diagram, including later developments and any controversy that arose in its development. As a whole, the book highlights how the use of geometric methods has played a central part in the development of economic theory and analysis; as a method of discovery, more commonly as a method of exposition and occasionally as a method of proof of propositions in economic theory and analysis. This highly anticipated book will appeal to theorists in microeconomics or macroeconomics, scholars of economic theory and analysis, as well as students in microeconomics, general equilibrium theory or macroeconomics at the advanced undergraduate or graduate level who want a definitive account of some figure or diagram. Historians of economic thought and methodologists will also find this book an invaluable resource.

1. Famous Figures and Diagrams in Economics

2. Famous Figures and Diagrams in Economics

3. Famous Figures and Diagrams in Economics

4. Famous Figures and Diagrams in Economics

5. Famous Figures and Diagrams in Economics