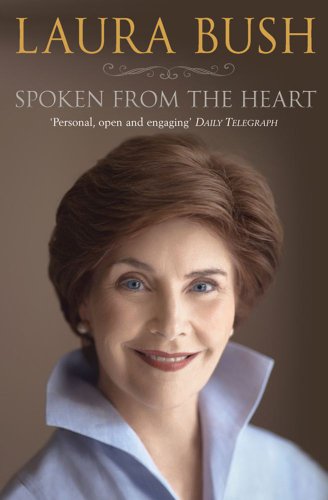 'Laura Bush writes evocatively of her Texas childhood' Metro 12/5 'Laura Bush is a more complex, interesting character than perhaps anyone had cause to guess' Observer 17/5 'Personal, open and engaging' Telegraph 18/5 'Frank, well-written and poignant... it should be compulsory reading for Mesdames Cameron and Clegg, with its lesson in the pains and pitfalls of office, and hints at what can be achieved even by those wearing lipstick at the edge of the frame' Edwina Curri, The Times 29/5 'A deeply felt, keenly observed account... that captures a time and place with exacting emotional precision' The Scotsman 22/05 'Likeable and down to earth' Sunday Independent 23/05 'Compelling' The Irish Times 29/05 'Bush writes with a winning lack of pretension and warmth... Bush shows a talent for detail and mood' Sunday Herald 16/05 "This is Laura Bush, unplugged... She comes across with a keener eye, a sharper tongue and a readier laugh."-USA Today "Part of what makes former First Lady Laura Bush's open, deeply felt and engrossing memoir genuinely memorable is its portrait of her marriage to George W. Bush ... One of Laura Bush's best qualities as a memoirist - and she is a particularly fine, lyrical one - is her ability to speak the language of feelings without recourse to cant or contemporary psychobabble... Perhaps the best parts of this beautifully written book involved the former first lady's deeply rooted appreciation for the physical landscape of Texas in all its seasons, which she appears to love second only to her family."--Los Angeles Times "Laura Bush writes as vividly of her upbringing in the bleak and unforgiving oil-patch towns of West Texas as Buzz Bissinger did in his classic Friday Night Lights."-Bloomberg "Laura Bush has a fine memory and is a good writer. As a Texan, storytelling seems to come naturally to her."-NPR.org "Mrs. Bush comes through as a thoughtful, compassionate woman who has developed a balanced approach to life and manages to connect easily with people from New York City to Afghanistan and Burma."-Washington Times "Bush does an excellent job capturing the landscape and people of her native West Texas."-Austin American-Statesman

1. Spoken From The Heart

2. Spoken From the Heart