Verwandte Artikel zu BION RICKMAN FOULKES & THE NOR: Advancing on a...

Harrison, Tom BION RICKMAN FOULKES & THE NOR: Advancing on a Different Front (Community, Culture and Change)

BION RICKMAN FOULKES & THE NOR: Advancing on a Different Front (Community, Culture and Change) 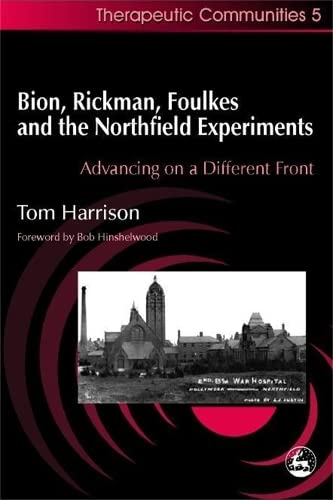 Northfield was referred to in tones of awe when one joined Group Relations work of the Tavistock Institute in the mid sixties, but there was never any detailed discussion, no flesh to the bones of the story. It was a mystery. Now, Tom Harrison has written of the myth and given it a substance that makes it more exciting than the myth itself... Harrison offers in his exposition of the myth a well documented, seduously researchedm gripping tale. Using his knowledge of groups, contemporary documents and personal interviews, he seamlessly unfolds the history... Harrison reaffirms in his book the importance of the ideas of Northfield but, more importantly, spells out its consequences for a democratic society.' - Organisational and Social Dynamics 'Taken over as a psychiatric military hospital in April 1942, Hollymore Hospital, Birmingham, treated a large number of servicemen suffering from so-called "war neuroses" until it was vacated by the army 6 years later. It has become well known for the so-called "Northfield Experiments", the first run by Wilfred Bion and John Rickman, and the second by Michael Foulkes, harold Bridger, Tom Main and others. Tom Harrison himself worked at Northfield as a consultant psychiatrist and this study is the outcome of 15 years of dedicated research. The history of the institution is clearly a great passion and has led him to painstaking archival research, together with numerous interviews of patients and staff. The best chapters deal with theorganization and running of the theraputic community, revealing the considerable contribution of Bridger, the original work of Laurence Bradbury as an art therapist and the tensions and rivalries that existed among the psychiatrists. However, it may be that Bion and Rickman are given too much credit for theoretical innovations. This is curious as Harrison's wide-ranging study provides evidence that others played important roles, notably Delahaye in the War Office Selection Boards, Rees as Director of Army Psychiatry, and in the field of group therapy the roles of Joshua Bierer, Maxwell Jones and Foulkes are clearly documented. This is possibly a reflection of the pressure exerted by psychoanalysts to establish a position of prominence in the field of analytical therapy. Northfield played an important part in the development of group therapy and rehabilitation techniques. Its success plausibly saved the UK exchequer considerable sums in war pensions as servicemen were returned to duty rather than discharged with a disability pension. This is a readable and thorough account of the institution, its personalities and theraputic interventions.' - Psychological Medicine, Volume 31 - 2001 'essential reading for anyone interested in the history of therepeutic communities in adult mental health services... a truly important book' - Thereputic Communities. The Northfield Experiments, which were conducted during the Second World War, mark an important moment in the development of psychiatry and in the therapeutic community movement. This is the first book to record the experiments in detail. Through work with soldiers suffering from neurosis, two new forms of group psychotherapy were developed. These challenged the traditional view of psychiatric patients as passive recipients of treatments. The First Experiment, conducted over the winter of 1942-43, was led by Wilfred Bion and John Rickman and emphasised the importance of the here-and-now experience, relationships within groups and the relevance of the social setting to the patient. The Second Experiment was based on more traditional psycho-analytic concepts and was evolved by Sigmund Foulkes during his work at the hospital. Bion, Rickman, Foulkes and the Northfield Experiments locates the experiments within the progress of social psychology during the early twentieth century, and the development of a new theory of military psychology. Harrison describes what actually happened within the hospital, drawing on interviews and letters as well as published material. As well as providing a fascinating account of a significant advance in psychiatry, the book demonstrates the importance of the experiments for psychiatrists working today.

Tom Harrison is a psychiatrist working with people who have experienced severe and enduring mental illness in Birmingham. He is actively involved with the Royal College and is secretary of the Rehabilitation Section and a member of the Public Education Committee. In the 1970s he worked at the John Connolly Hospital, which attempted to provide a therapeutic community approach to a typical psychiatric service.

1. Bion, Rickman, Foulkes and the Northfield Experiments: Advancing on a Different Front (Community, Culture and Change)

2. Bion, Rickman, Foulkes and the Northfield Experiments: Advancing on a Different Front (Community, Culture and Change)

3. Bion, Rickman, Foulkes, and the Northfield Experiments: Advancing on a Different Front