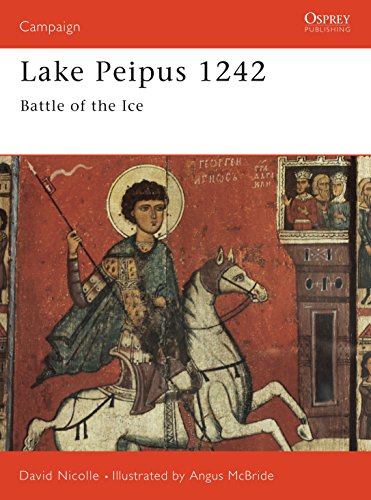 The battle of Lake Peipus took place in 1242 between the Teutonic Knights and the Russian city-state of Novgorod, led by its inspirational leader Alexandre Nevskii. The Teutonic Knights were a powerful military order, backed with the crusading zeal of Europe, the blessing of the Pope and the support of the Holy Roman Emperor. This battle, although little-known in the west, was important in the history of the medieval eastern crusades, the Teutonic defeat having a serious effect on future events. David Nicolle's excellent text examines the Crusade against Novgorod and the fierce fighting around the frozen shores of Lake Peipus.

David Nicolle was born in 1944, the son of the illustrator Pat Nicolle. He worked in the BBC Arabic service for a number of years, before going 'back to school', gaining an MA from the School of Oriental and African Studies, London, and a doctorate from Edinburgh University. He later taught world and Islamic art and architectural history at Yarmuk University, Jordan. He has written many books and articles on medieval and Islamic warfare, and has been a prolific author of Osprey titles for many years. David lives and works in Leicestershire, UK.

Angus McBride is one of the world's most respected historical illustrators, and has contributed to more than 70 Osprey titles in the past three decades. Born in 1931 of Highland parents but orphaned as a child, he was educated at Canterbury Cathedral Choir School. He worked in advertising agencies from 1947, and after national service, emigrated to South Africa. He now lives and works in Cape Town.