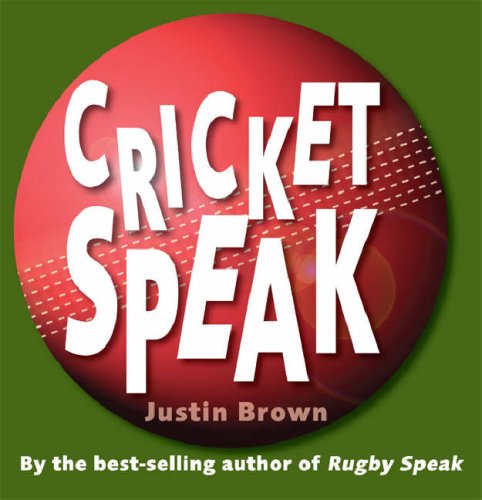 The game of cricket was invented by the Brits, perfected by the West Indians and Australians, and to this day - and no doubt forever more - will continue to utterly baffle the everyday Yank. To say it is a strange sport is an understatement of Viv Richard's sized proportions. What other game would have you wearing the same colour as your opposition? What other game would it be good thing to have the runs? In what other arena would it be more fun watching a beach ball fly round the crowd rather than watch the professionals in the middle? But for all that, fans don't just like cricket, oh no, they love it! However, yelling out pithy one-liners at a five-day test match requires a great deal of concentration, stamina and.booze. It is not for the timid or weak. Repetitive sayings may work for say, an eighty-minute rugby game, but yelling 'You're a loser' becomes downright boring by lunch on the third day. What better reason then to arm yourself with Cricket Speak - a book you can pop in your pocket along with your vodka-injected watermelon, bacon sandwiches and Sunday morning paper, and pull out when inspiration is lagging. If, like the typical sports punter, for whatever desperate ego driven reason you need to become the centre of attention, this book is for you.

Justin Brown is a writer, comedian, radio host and the author of several books including BOWLING THROUGH INDIA, UK ON A G-STRING and TEED OFF IN THE USA.

Buchbeschreibung Paperback. Zustand: Very Good. The book has been read, but is in excellent condition. Pages are intact and not marred by notes or highlighting. The spine remains undamaged. Bestandsnummer des Verkäufers GOR001810667