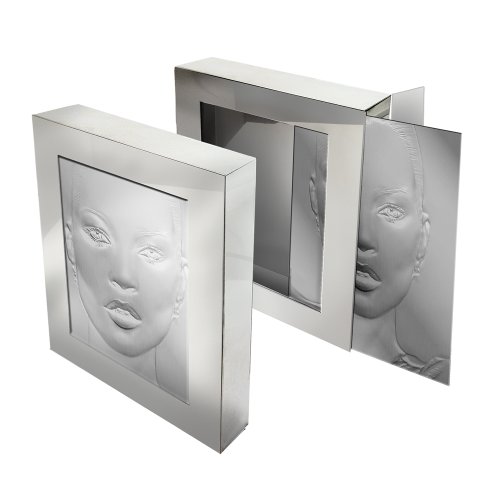 Visionaire is a multi-format album of fashion and art, published in exclusive, numbered limited editions. Since its inception in the spring of 1991, its relentless quest to push the idea of the printed magazine into increasingly uncharted areas has prompted Visionaire to pioneer issues that are wearable, edible, audible, sprayable, playable, magical, tactical, digital, and now--with its 63rd issue--indestructible. The world record-breaking and highly collectible publication takes another step along the path to immortality with Forever. Conceived with the support of G-Shock, makers of "the watch that never breaks," this inkless and paperless issue of the magazine takes the durable capabilities of high-performance, weather-resistant gadgetry and applies them to the medium of the art and fashion image. Complete with an all-metal case that acts as a frame, the issue consists of ten embossed "pages" by artists including Inez & Vinoodh, Craig McDean, Yoko Ono, Richard Avedon, Maurizio Cattelan and Pierpaolo Ferrari. Working with CGI artists, Visionaire has transformed two-dimensional photographs into three-dimensional reliefs, which were then pounded into 9 x 12" embossed metal plates. With this new issue, Visionaire can proudly claim to have produced the first publication to be made entirely of metal.