Benbow, Tim World War I: Naval Warfare 1914 - 1918: From Coronel to the Atlantic and Zebrugge (The History of World War I)

World War I: Naval Warfare 1914 - 1918: From Coronel to the Atlantic and Zebrugge (The History of World War I) 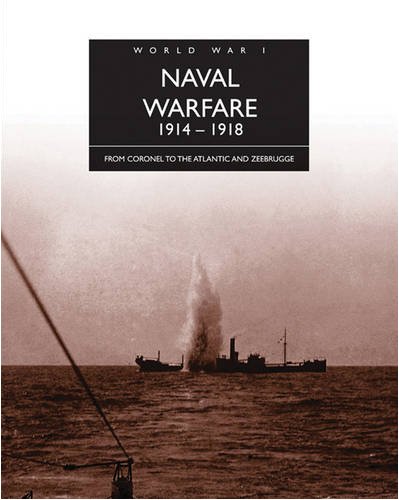 For all its impact, World War I remains shrouded in myth, mystery and mourning. It exists as a series of disjointed images: old photographs and fragments of poems; devasted landscapes; anonymous soldiers scrambling over the top; above all, the endless cemeteries of the Western Front. 'The History of World War I' returns that tragic conflict to the sphere of history. Based on a half-century of sophisticated research, incorporating state-of-the-art graphics, the six volumes of the series present the war on land, at sea, and in the air in a global context, and in human terms.
--Dennis Showalter

At the start of the war, the German Empire had cruisers scattered across the globe, some of which were subsequently used to attack Allied merchant shipping. The British Royal Navy systematically hunted them down, though not without some embarrassment from its inability to protect Allied shipping. However, the bulk of the German East-Asia squadron did not have orders to raid shipping and was instead underway to Germany when it encountered elements of the British fleet. Soon after the outbreak of hostilities, Britain initiated a naval blockade of Germany. The strategy proved effective, cutting off vital military and civilian supplies. The 1916 Battle of Jutland developed into the largest naval battle of the war, the only full-scale clash of battleships during the war. The Kaiserliche Marine's High Seas Fleet, commanded by Vice Admiral Reinhard Scheer, squared off against the Royal Navy's Grand Fleet, led by Admiral Sir John Jellicoe. The engagement was a standoff, as the Germans, outmaneuvered by the larger British fleet, managed to escape and inflicted more damage to the British fleet than they received. Strategically, however, the British asserted their control of the sea, and the bulk of the German surface fleet remained confined to port for the duration of the war. German U-boats attempted to cut the supply lines between North America and Britain. The nature of submarine warfare meant that attacks often came without warning, giving the crews of the merchant ships little hope of survival. The U-boat threat lessened in 1917, when merchant ships entered convoys escorted by destroyers. With the last few men who served in World War I now dying out, and the 90th anniversary of the Armistice coming in November 2008, there is no better time to revaluate this controversial war and shed fresh light on the conflict. With the aid of numerous black and white and colour photographs, many previously unpublished, the World War I series recreates the battles and campaigns that raged across the surface of the globe, on land, at sea and in the air. The text is complemented by full-colour maps that guide the reader through specific actions and campaigns.

1. Naval Warfare (The History of World War I)

Buchbeschreibung Hardback. Zustand: Very Good. The book has been read, but is in excellent condition. Pages are intact and not marred by notes or highlighting. The spine remains undamaged. Bestandsnummer des Verkäufers GOR006845812

3. Naval Warfare (The History of World War I)

Buchbeschreibung Hardcover. Zustand: Good. A slight tan to page edges Good condition is defined as: a copy that has been read but remains in clean condition. All of the pages are intact and the cover is intact and the spine may show signs of wear. The book may have minor markings which are not specifically mentioned. Most items will be dispatched the same or the next working day. Bestandsnummer des Verkäufers wbb0017472288

5. Naval Warfare (The History of World War I)

6. Naval Warfare (The History of World War I)