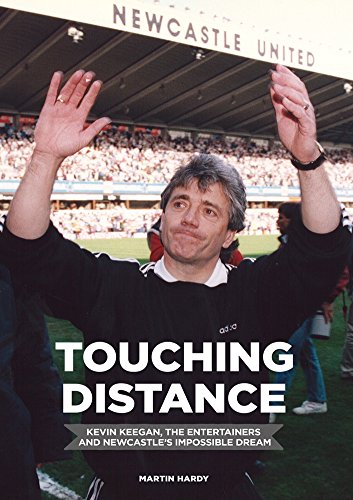 "It is a terrific read about a great team which echoes with all of the vibrancy, explosiveness and unadulterated joy of being a part of that team; something that shines through from every player. They loved it, as Keegan might have said, even if one or two regrets will always linger." --The Sports Book Review

"A must read for any Magpie." --FourFourTwo

"A thing of beauty and heartily recommended." --George Caulkin, The Times

"Hardy's book is a celebration, not only of Keegan and Newcastle, but also of how much fun football used to be. For that reason, it's as poignant as it is entertaining... 8/10." --The Set Pieces

"Superb... Hardy has captured the time, the characters and the mood perfectly in a book which might have been painful for Newcastle fans but is instead an essential celebration of a period which transformed the club's relationship with its public.... Beautifully written." --Mark Douglas, Newcastle Chronicle

"A scintillating oral history of the team's title charge in the 1995-96 season... Touching Distance is highly recommended for anyone who wants to relive that season from inside the St James' Park dressing room. Every Newcastle fan should have it on their Christmas list." --Morning Star

"The book looks at Kevin Keegan and his Newcastle United entertainers and is a must-read not just for Toon fans, but all football fans." --Evening Chronicle

"The book is part biography and part thriller but most of all a love story. It is a real page turner, I genuinely got misty eyed. At least twice I found myself thinking, 'We can still do this!' Touching Distance is a rollercoaster of a read and I'm sure it will arrive down tens of thousands of Geordie chimneys on December 25." --The Rocking Magpie

"The biggest compliment I can pay Martin Hardy is that Touching Distanceevokes memories of NUFC that I thought I had forgotten. Not even major memories. Daft little things like conversations before games with my Dad. A frankly brilliant book." --Mark Carruthers, Non-League Daily

At the start of February, 1992, Newcastle United were facing relegation to the third tier of English football for the first time in their history. They were also facing bankruptcy. St James' Park had been neglected, the club's best players had been sold. In a daring move, Newcastle appointed Kevin Keegan as manager. Keegan, the two-time European Footballer of the Year, had played for the club between 1982 and 1984. He had been out of football since. His appointment as manager was as big a shock as when he arrived as a player. Exactly four years after Keegan's return to the North east of England, Newcastle were top of the Premiership, nine points clear of Manchester United, having played a game less. It would turn out to be one of the most memorable seasons in the modern history of English football. Keegan's side would play a unique brand of football and become known as the Entertainers. They would take part in a game at Anfield that became widely recognised as the best the Premier League has ever seen. Keegan would also famously square up to Sir Alex Ferguson.Touching Distance tells the story of that remarkable season, through the highs and the lows of a truly dramatic campaign. It also traces the seeds of the revival back to Keegan's first spell as a player, to his return and the dramatic impact he had on a football club, its supporters and an entire region. Touching Distance talks to the people who made it happen, the players, the coaching staff and the board and relives a truly momentous period for the club. It is a story of hopes and dreams and when, for Newcastle United, anything seemed possible.