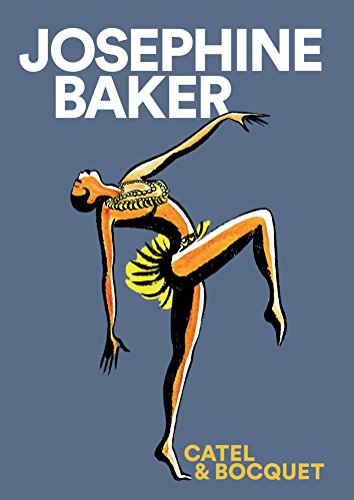 Paris, 1925. Over the course of a single evening, the Mississippi-born dancer Josephine Baker becomes the darling of the Roaring Twenties. Some audience members in the Theatre des Champs-Elysees are scandalised by the African American's performance in La Revue Negre, but the city's discerning cultural figures - among them Picasso and Cocteau - are enchanted by her exotic, bold and uninhibited style., When her adopted country grants her citizenship in 1939, Josephine sees her fame as a means of helping the French resistance. She takes advantage of her globe-trotting lifestyle to pass on messages and to gather information. Years later, she is awarded the Legion d'honneur by Charles de Gaulle., In the 1950s, installed in a palatial 15th century chateau, Josephine adopts 12 children from different ethnic backgrounds. Her "Rainbow Tribe", as she often called them, was a living, breathing symbol of a happy and harmonious multicultural society. In Josephine Baker, Catel and Bocquet paint a glorious portrait of a spirited, principled and thoroughly modern woman, capturing the heady glamour of 1920s Paris in beautifully expressive detail.

Josephine Baker (1906-1975) was nineteen years old when she found herself in Paris for the first time in 1925. Overnight, the young American dancer became the idol of the Roaring Twenties, captivating Picasso, Cocteau, Le Corbusier, and Simenon. In the liberating atmosphere of the 1930s, Baker rose to fame as the first black star on the world stage, from London to Vienna, Alexandria to Buenos Aires. After World War II, and her time in the French Resistance, Baker devoted herself to the struggle against racial segregation, publicly battling the humiliations she had for so long suffered personally. She led by example, and over the course of the 1950s adopted twelve orphans of different ethnic backgrounds: a veritable Rainbow Tribe. A victim of racism throughout her life, Josephine Baker would sing of love and liberty until the day she died.

Jose-Luis Bocquet published his first novel as part of the "Black Series" (Gallimard). Since then, he has written several other novels for a number of publishers. He is also the author of monographs devoted to Henri-Georges Clouzot, Georges Lautner, Andre Franquin, and Rene Goscinny. As a scriptwriter for comic strips, his career began in the pages of Metal Hurlant, and went on to include ten titles with artists Serge Clerc, Arno, Max, Philippe Berthet, Francis Valles, Andreas Geffe, Stanislas, and Steve Cuzor. He previously collaborated with Catel Muller on the acclaimed graphic biography Kiki de Montparnasse. Catel Muller co-authored Le Sang des Valentines with Christian De Metter, published by Casterman (People's Choice First Prize at Angouleme 2005). For the same publisher, she produced three volumes of the adventures of Lucie (with Veronique Grisseaux). Catel's children's illustrations include the Marion strip, written by Fanny Joly, for Bayard publishers. Heroines, both great and small, are a constant feature of her work, as in Piaf for Nocturne publishers. In 2008, she pursued her study of the eternal feminine with Quatuor by adapting the texts of Pascal Quignard, Jacques Gamblin, Thierry Bellefroid, and Jose-Luis Bocquet. She also collaborated with Bocquet onthe acclaimed graphic biography Kiki de Montparnasse.

Buchbeschreibung Paperback. Zustand: New. Paperback. The glorious life and tumultuous times of Josephine BakerShipping may be from multiple locations in the US or from the UK, depending on stock availability. 496 pages. 1.446. Bestandsnummer des Verkäufers 9781910593295