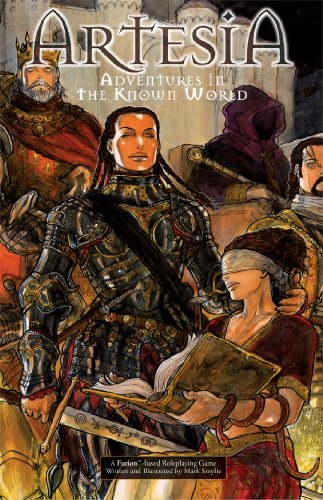 The award-winning graphic novel Artesia comes to life in the Adventures in the Known World RPG, using a modified and easy-to-use Fuzion-based roleplaying system to plunge players into the strife-riven realms of the Known World, from the Warring Citadels of the Daragjan Highlands to the never-ending feud between the Sun Court of Illia and the Phoenix Court of the Empire of Thessid-Gola. Includes an expansive adaptation of R. Talsorian Games' LifePath character-generation system including birth omens, star signs and divine and heroic lineages, and rules for talents and abilities accessible to characters through the Arcana, the Tarot-like system representing the Known World's archetypal paths of power and the foundation of an unique system of experience, allowing game rewards for virtually all types of character actions.

Mark Smylie has worked as a writer, illustrator, editor, and publisher in comics for over a decade. His epic military fantasy graphic novel series, Artesia, was first published by Sirius beginning in 1999. He was nominated for the Russ Manning Award for Best Newcomer that year, and for an Eisner Award for Talent Deserving of Wider Recognition in 2001. Over the years his illustrations have appeared in game books from Wizards of the Coast, White Wolf, and most recently Kobold Press, and in collectible card games from AEG. He designed and illustrated a role-playing game based on Artesia that won the Origins Award for Role-Playing Game of 2006, three Indie RPG Awards, and was nominated for six ENnies. He founded Archaia in 2002 as a self-publishing home for his graphic novels, and still serves as the company's Chief Creative Officer.