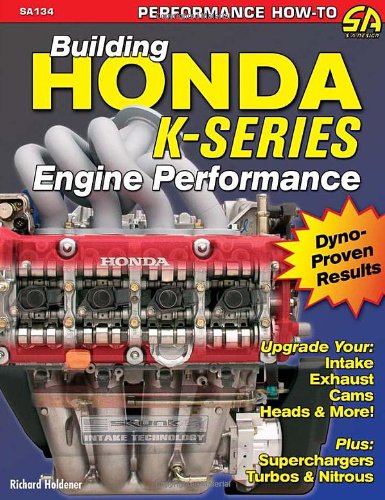 The all-new K-series engines are now found in all Honda and Acura performance models, and are also becoming the engine swap of choice. In Building Honda K-Series Engine Performance, author Richard Holdener gives you a detailed description of the K-series engines, followed by a put up or shut up account of all kinds of aftermarket performance parts. Holdener uses over 400 color photos and dyno graphs to help you separate the advertising hype from the real K-series performance. You'll find chapters detailing upgrades to the intake, exhaust, cylinder heads, camshafts, and short block, as well as on how to add turbochargers, superchargers, and nitrous oxide. Don't spend your hard-earned cash figuring out what works and what doesn't--pick up Building Honda K-Series Engine Performance and know for sure.

Richard Holdener was born in Washington D.C. but his family moved almost immediately to California. His first automotive experience came with his father at a car show. After viewing all of the elaborate horsepower hard-ware, Holdener was hooked on going fast. His garage has been home to a variety of high-performance machinery. The list includes a couple of Camaros, a Lotus-motored Jensen Healy, a 260 Z, a 230SL Mercedes, a 1972 911T, a blown crewcab Dualie, a pair of Hondas (one supercharged Civic Si), a Toyota Corolla, a Mercedes 450 SEL, and trio of hot motorcycles. First came the Honda 500 Interceptor, then the 600 Ninja, and finally the GSX-R750. Somewhere in all this madness came a 1965 Hipo GT and a trio of 5.0L Mustangs. Holdener’s first article came from his Mustang adventures at the Silver State. Since this initial coverage, Holdener has contributed to numerous magazines, including Muscle Mustangs & Fast Fords, Car Craft, Super Ford, Truckin’, Mustang Illustrated, Popular Hotrodding, Sport CompactCar, European Car, Pontiac Enthusiast, and many others.