Knutsen, Norm Tugs and Other Hard-Working Vessels of Puget Sound: A Scrapbook from the Earlier Days

Tugs and Other Hard-Working Vessels of Puget Sound: A Scrapbook from the Earlier Days 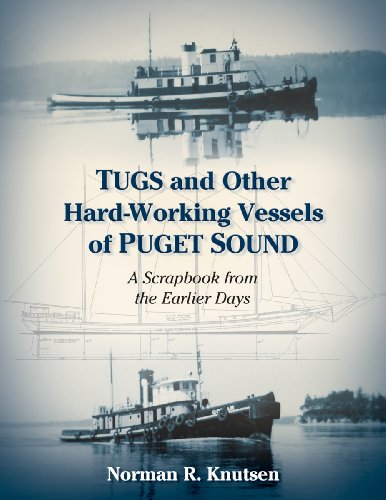 For a time in the first half of the 20th century, commercial vessels powered by sail, steam, and internal combustion engines were all plying their trade together on Puget Sound. During those earlier years, mills were busy sawing logs to satisfy the hungry market for lumber, plywood, and other wood products. Boat building and commercial fishing flourished, too. As time went on, wind power gave way to steam propulsion, steam machinery was replaced by internal combustion engines, and paddle wheels disappeared in favor of propellers. This was a unique and exciting era of Puget Sound maritime activity. Eventually, logs were being shipped instead of finished wood products, transportation via highways was increasing, and the fisheries were beginning to show signs that all was not well. Because of these changes, the need was lessened for tugs, freight and passenger boats, and fishing boats on Puget Sound.

From personal remembrances and research evolved Tugs and Other Hard-Working Vessels of Puget Sound. The author, Norm Knutsen, was born and raised in Olympia, Washington. Time off from school in the early part of Norm's life provided opportunities for working on the waterfront and decking abroad tugs and other vessels. Later, as a naval architect and marine engineer, Norm embarked on a long career in ship design.

1. Tugs and Other Hard-Working Vessels of Puget Sound