Balding, Timothy The Impostors: A Novel 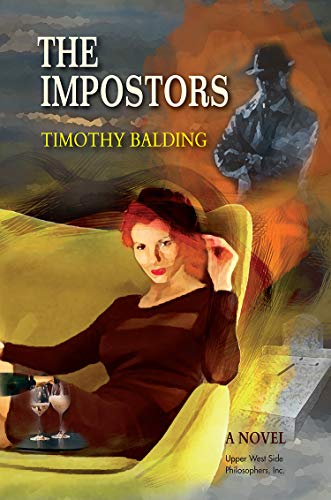 The Impostors: A Novel (Paperback)

Buchbeschreibung Paperback. Zustand: New. Language: English. Brand new Book. Fiction. Contemporary British Fiction. Wealthy London banker Ronald Chapman is found deadâ a suicide, apparently, though the police are still on the case. Janet, his beautiful widow and sole heir to their fortune, finally freed from her loveless marriage, turns to her beloved Shakespeare for solace: After life's fitful fever, he sleeps well; nothing can touch him further. As she awaits the release of Ronald's body for burial, there are arrangements to be made and appearances to uphold. She has only one problem: Ronald's best friend, who is expected by family and friends to speak at the funeral.doesn't actually exist. Can the Extra! agencyâ specialists in the rental of fake hecklers, phony cuckolds, inexistent relatives, sham boyfriends, and counterfeit job candidatesâ help? Extra!'s boss, Mike Fielding, is ready for anything that's more or less within the law and might be approved by his alter ego, private-eye Philip Marlowe. The job falls on failed actor Will Power, who is buffeted between the dull reality of his own life and the exciting, romantic world of make-believe in this wicked comedy of deceit, treachery and love. All the world's a om slapstick and laugh-out-loud to dry and satirical, Balding uses wit in all its forms to tell a story of lies and façades that, refreshingly, shows us the lighter side of deception.With a host of colourful characters, and plenty of secrets to uncover, THE IMPOSTORS is a hilarious look at the human capacity for lies, deception and fantasy.â N. J. Crosskey, author of Poster Boy For everyone, this is a very funny book. But, if you're an aficionado of philosophy, it's a very, very funny book. . The hero, the improbably named Will Power (the first signal of some deeper meaning?), is an unsuccessful aspiring actor, who signs up with a theatrical agency with a standout Unique Selling Point: it sends its thespians out to play fictional parts in the real world, not in films or plays. . The plot, peopled with delightfully eccentric characters firmly rooted in middle class England, belts along at a hilarious and fast pace that brought back memories of Phillip King farces, although this modern version is more intellectual and wittier than these relics from the fifties and sixties. . There's a laugh in every line, or at least in every paragraph. So much for the comic novel; what about the philosophy? Who are we? Why are we here? Does it matter? If we are pretending to be someone else, are we really that person? Or, if we are being ourselves, are we really pretending? Is philosophy merely a parlour game, or should we take it seriously. Is existentialist angst a fad? Or maybe a hobby? Was Freud a fraud? Was Sartre a swindler? Like a good philosopher, Mr. Balding asks all these questions, and many others. And like a good philosopher, he doesn't answer any. A book to make you think. Nice work! An outstanding novel and a real pleasure to read.â James Gault, The Voice of Literature. Bestandsnummer des Verkäufers PWW9781935830627