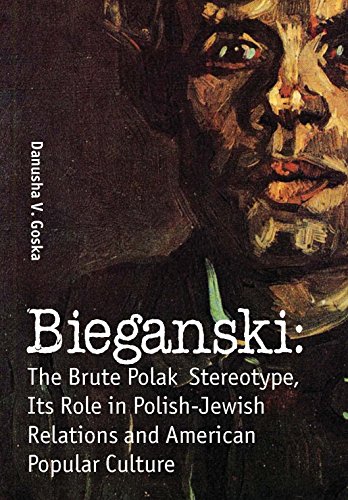 "Stereotypes of Poles have been commonplace in Western society. Danusha V. Goska presents a comprehensive overview of such images in a balanced fashion. She offers no apologetic for genuine instance of Polish anti-Semitism. But she also exposes those rooted in outright prejudice with no foundation in fact. An important contribution to improved Polish-Jewish understanding."--John T. Pawlikowski, OSM, Ph.D., professor of Social Ethics, Director, Catholic-Jewish Studies Program Catholic Theological Union Chicago "A powerful, provocative, ultimately profound work of scholarship regarding the stereotypification of Poles and its implications not only for Polish-Jewish relations in the Old World and the New, but also for anyone wishing to fathom the interworkings of class and ethnicity in an America that has all too often fallen short of its promise."--James P. Leary, folklorist, University of Wisconsin "In this most important work, Dr. Goska's style incorporates those necessary ingredients that justify writing as an art form: her grammar is impeccable, even while the pathways of her sentences can be unpredictable. Her imagery is robust, but yet it never gets in the way of the underlying premises of her arguments. Moreover, her thinking is crisp, and her knowledge of this very sensitive topic is thoroughly evident. Indeed, the reader cannot help but be persuaded by the logical unfolding of the positions she brings to this necessary work. Above all, she establishes that all-important trust in her readers: that while she may jostle their previously-held constructs, she will also protect them on a literary journey that could be harrowing and dangerous in lesser hands."--Dr. Michael Herzbrun, Rabbi, Temple Emanu-El, Rochester, NY "Bieganski is a truly important book because it challenges and demolishes the widely held belief that Poles are nothing more than ignorant and brutish anti-Semites who played a central role in causing the Holocaust. Goska does a first-rate job of describing how Jews and Poles really interacted with each other over their rich history together. Let's hope that this book is widely read and helps change the conventional wisdom about Polish-Jewish relations."--John J. Mearsheimer, R. Wendell Harrison Distinguished Service Professor of Political Science at the University of Chicago "Danusha Goska's daring and far-reaching study examines the sources and prevalence of stereotyped images of Poles as brutal, subhuman creatures. Drawing on her extensive research in history, popular culture, and folklore, and also on interviews of Poles and Jews in America today, interviews of both stereotypers and victims of stereotyping, she teaches us all something profound about how the image of the Polak originated and why it continues to flourish."--John Guzlowski, author of The Third Winter of War: Buchenwald and Lightening and Ashes "'Bieganski' is the name of an anti-Semitic Polish character in William Styron's 1979 novel Sophie's Choice. Goska (women's and gender studies, William Paterson U., Wayne, New Jersey) confronts the stereotypes conveyed in Polak jokes and conflations of them with other East European Christians, e.g., in the 2006 film Borat. Based on interviews with American Jews on storytelling support of the Biegenski trope; analyses of portrayals of Poles and Jews in American media; prewar and post-Holocaust Jewish thought and literature; the middleman minority theory; and parallels between stigmatized minorities, she examines how Poles and Jews have historically defined themselves as opposites. The author, a Polish Catholic, acknowledges the support of many Jews in addressing this discomforting theme."--Annotation (c)2010 Book News Inc. Portland, OR "Goska shows that negative Polish stereotypes, unlike negative stereotypes of other national, racial, and ethnic groups, continue to be acceptable...Goska does an admirable job showing negative Polish stereotypes...Other writers must force open widely the door Goska has opened."--Daniel T. Weaver, Upstream Two: A Mohawk Valley Journal "Goska makes an important effort to demolish the 'dumb Polack' stereotype and the view that Poles are brutish, ignorant, and anti-Semitic by analyzing the image's origins in Europe and its adoption and perpetuation in US culture. . . . Recommended."--R. K. Byczkiewicz, Central Connecticut State University "CHOICE (February 2011) " "To some Polish Jews, especially Holocaust survivors outside Poland, a mythical Pole like Bieganski seems more real than imagined. Danusha Goska, an American scholar of Polish descent, examines this skewed perception of Poles in Bieganski the Brute Polak [sic] Stereotype, Its Role in Polish-Jewish Relations and American Popular Culture ... The topic she addresses in this wide-ranging book is of considerable interest because Jews and Poles have compiled a long record of coexistence in Poland."--Sheldon Kirshner, The Times of Israel, 5 Feb 2017

In this controversial study, Goska exposes one stereotype of Poles and other Eastern Europeans. In the "Bieganski" stereotype, Poles exhibit the qualities of animals. They are strong, stupid, violent, fertile, anarchic, dirty, and especially hateful in a way that more evolved humans are not. Their special hatefulness is epitomized by their Polish anti-Semitism. "Bieganski" discovers this stereotype in the mainstream press, scholarship, film, in Jews' self-definition, and in responses to the Holocaust. Bieganski's twin is Shylock, the stereotype of the crafty, physically inadequate, moneyed Jew. The final chapters of the book are devoted to interviews with American Jews. These reveal that Bieganski - and Shylock - are both alive and well among those who have little knowledge of Poles or Poland.

Buchbeschreibung Academic Studies Press, United States, 2010. Hardback. Zustand: New. New. Language: English. Brand new Book. Winner of the 2010 Halecki Award for Outstanding Book on the Polish Experience in America In this study, Goska exposes one stereotype of Poles and other Eastern Europeans. In the aEUROoeBieganskiaEURO stereotype, Poles exhibit the qualities of animals. They are strong, stupid, violent, fertile, anarchic, dirty, and especially hateful in a way that more evolved humans are not. Their special hatefulness is epitomized by Polish anti- Semitism. Bieganski discovers this stereotype in the mainstream press, in scholarship and film, in JewsaEURO (TM) self-definition, and in responses to the Holocaust. BieganskiaEURO (TM)s twin is Shylock, the stereotype of the crafty, physically inadequate, moneyed Jew. The final chapters of the book are devoted to interviews with American Jews, which reveal that BieganskiaEURO"and ShylockaEURO"are both alive and well among those who have little knowledge of Poles or Poland. Bestandsnummer des Verkäufers TNP9781936235155