Verwandte Artikel zu The Eichmann Trial Diary: A Chronicle of the Holocaust

Minerbi, Sergio I. The Eichmann Trial Diary: A Chronicle of the Holocaust

The Eichmann Trial Diary: A Chronicle of the Holocaust 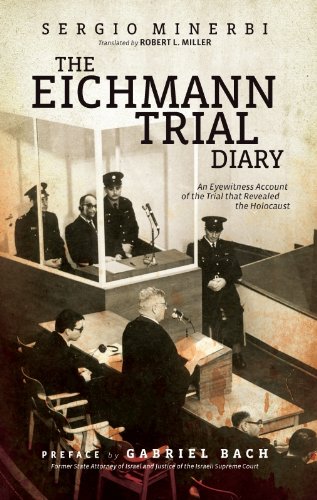 Fifty years ago, in April 1961, the trial of Adolf Eichmann suddenly revealed to a worldwide audience in all its tragic detail, and for most people for the first time, the shocking reality of the horrors of the Nazi Final Solution. At the time it was not yet known by its current name: the Holocaust or the Shoah. Many journalists and reporters were dispatched from all over the world to cover the trial. Hannah Arendt in particular, was there for the New Yorker and produced a number of articles and a famous book entitled Eichmann in Jerusalem. Her work was both acclaimed and harshly criticized for its interpretation of those horrible events that destroyed millions of Jews and other victims in Europe during World War II. At the same time, Sergio Minerbi, a young Israeli of Italian origin who had emigrated to Palestine in 1947 was commissioned to cover the trial for Italian State Radio RAI. His work constitutes both a daily chronicle of the court proceedings with a vivid description of the atmosphere surrounding the trial inside the courtroom and within the city of Jerusalem that conveys a realistic and vivid picture of those proceedings. The result is one of the best and most fluid accounts of what happened in Jerusalem as the tribunal convened to hear the most sensational and upsetting case of crimes against humanity ever tried. The Eichmann trial went beyond the Nuremberg trials that had barely considered the subject of genocide and extermination. It was also remarkable for another reason: the State of Israel had been in existence for just 13 years and had been founded by many of the survivors of the Final Solution. Many women and men outside the courtroom could carried their experience with them every day of their lives and could now see one of their main torturers face to face. The complaint against Adolf Eichmann, a high officer of the SS and Gestapo specialized in the"Jewish Question" on behalf of the government of Nazi Germany was therefore for his direct responsibility in the murder of the Jews. The case against him was brought directly by the injured party, namely the Jewish People.

Dr. Sergio Itzhak Minerbi was born in Rome and emigrated to Palestine in 1947. He received a B.A. in Economics and International Relations from the Hebrew University in 1960, and a Ph.D. from the Sorbonne in Paris in 1967. From 1961 to 1989 he worked at the Ministry of Foreign Affairs, as Economic Counselor in Brussels (1963-1967), Ambassador to Ivory Coast (1967-1971), Ambassador to the European Communities, Belgium and Luxembourg (1978-1983) and finally as Deputy Director General for Economic Affairs until 1989. The author of 11 books and 126 academic articles, Dr. Minerbi is currently researching the relations between the Catholic Church and the Jews, especially with regard to the Holocaust. He resides with his wife in Jerusalem, Israel. Currently a Catholic Priest in the west of England, Robert Miller has been a long-time student of Maritime Social History and member of the Society for Nauthical Research and the International Maritime Economic History Association. He has worked for both the Missions to Seaman and the Apostleship of the Sea. He is the author of Priest in Deep Water (2010).

1. The Eichmann Trial Diary: A Chronicle of the Holocaust

2. The Eichmann Trial Diary: A Chronicle of the Holocaust Sergio Minerbi and Robert L. Miller

3. The Eichmann Trial Diary: A Chronicle of the Holocaust