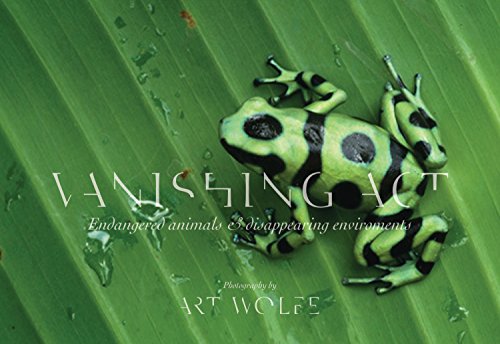 Praise for the author:"Art Wolfe's photographs are magically composed and stunningly beautiful. Like nature poetry of the first rank, they pull our emotions closer to some of the most charismatic and (sadly) endangered animal species of the world." Edward O. Wilson"Art Wolfe is an artist. He works with all of the artistic elements . . . line, form, texture, composition, light and shadow, and produces visual masterpieces from the real world. Turning the pages of The Living Wild brings on not only a psychological reaction but a physical reaction . . . my jaw drops and my breath is almost taken away by the imagination and beauty he has brought to us." Robert Bateman"Art Wolfe's brilliant and sensitive photographs are a powerful stimulation for changing attitudes. Art is passionately involved in the life-and-death struggle of the African continent, its people, its wildlife, and its forests, woodlands, savannahs, and deserts. His love and commitment are revealed in each photograph and these, in turn, will stir the heart of the reader." Jane Goodall"[A] master of the most advanced photographic techniques." Roger Tory Peterson"Art has the broadest range of excellence of any nature photographer I know." Galen Rowell

In this astonishing book, legendary wildlife photographer Art Wolfe turns to one of nature's most fundamental survival techniques: the vanishing act. His portraits show animals and insects disappearing into their surroundings, using deceptions, disguises, lures, and decoys to confuse the eyes of both predator and prey. In a world where nothing is as it appears to be, a lion blends into the tall grass in the late-afternoon sun, or a harp seal disappears against his snowy backdrop. Pastel orchids can suddenly morph into predatory praying mantises, while lizard heads become tails. What at first appears to be a torn and decomposing leaf on a forest floor in Peru suddenly sprouts legs and starts walking: it is a leaf-mimic katydid. Spotting each cryptic animal amid Wolfe's clever compositions is both a fun and an informative challenge. At a time when many species are performing permanent vanishing acts due to habitat loss and human encroachment, this book showcases the beauty and evolutionary extremes of animal behavior and artfully illustrates the tenacious will to stay alive in an eat-or-be-eaten world.