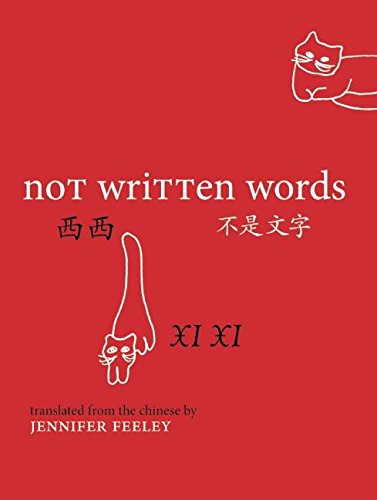 Xi Xi's work details the constantly shifting urban space of Hong Kong--between tradition and modernity--as well as the multilingual zones created by its Mandarin and Cantonese speakers. Best known for her short stories, essays, and screenplays, this is the first major collection of Xi Xi's poetry in English translation. Her writing displays a childlike wonder and keen ear for the constantly evolving space of Hong Kong and southern China. The haunting, often morbid lyricism that marks her work has won her many awards, a devoted following in Hong Kong and Taiwan and a growing audience across the globe. The book is bilingual (facing pages).

Xi Xi: (Cheung Yin) came to Hong Kong from Shanghai in 1950, and became one of the most famous writers in Hong Kong, and its most innovative poet. Her first work was published in 1955, when she was still a teenager, but she only gained widespread recognition in 1983, when a story won a prestigious prize in Taiwan. She has published 31 books (7 novels, 21 short story and essay collections, one novella, and two poetry collections), as well as newspaper and magazine columns, film theory and criticism, art criticism, translations, and screenplays. She graduated from the Grantham College of Education in 1958 and worked as a primary school teacher. In the 1960s she adopted Xi Xi as her pen name. Jennifer Feeley: Assistant Professor of Chinese Literature at the University of Iowa; Ph.D., Yale University, Department of East Asian Languages and Literatures (2008) M.Phil., Yale University, Department of East Asian Languages and Literatures (2004). Her research, teaching and writing interests include literary translation, modern Chinese literature and culture, modern and contemporary Chinese poetry, Chinese cinema and popular culture, and the poetry of Hong Kong, as well as translations of poems by Leung Ping-kwan, Zhu Zhu, Xi Xi, Zhou Zan, and Tang Danhong.

Buchbeschreibung Paperback. Zustand: New. Bilingual. Language: English. Brand new Book. As noted by World Literature Today, "Xi Xi is one of the most familiar and best translated of the Hong Kong writers," but up until now English-language readers have primarily had access only to her novels, essays and short stories. Her poetry displays a childlike wonder and keen ear for the constantly evolving space of Hong Kong and southern China. The haunting, often morbid lyricism that marks her writing has won her many awards, a devoted following in Hong Kong and Taiwan and a growing audience across the globe. Encylopedia Britannica calls her "arguably the greatest female writer from Hong Kong."Not Written Words" is the 2nd volume in the Hong Kong Atlas series. The first volume is "Wandering Hong Kong with Spirits," by Liu Waitong, translated by Desmond Sham and Enoch Tam (Zephyr, 2014). Bestandsnummer des Verkäufers BZE9781938890123