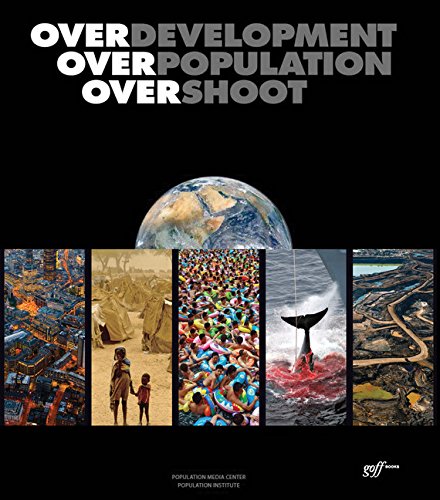 Every problem facing humanity, from poverty to violent conflict over resources, is exacerbated by a ballooning human population - and so is every problem facing nature, including ecosystem loss, species extinctions, and climate chaos. But why is the demographic explosion and its effects ignored by policymakers and the media? Why do important people within the global environmental movement itself avoid the great challenges of the population issue? Isn't it time to start talking about the equation that matters most to the future of people and the planet? Overpopulation + Overdevelopment = Overshoot. In a book as large and dramatic as the topic it covers "Overdevelopment, Overpopulation, Overshoot " (OVER) will ignite that conversation around the world. In an exhibit-format treatment with provocative photos from across the globe, OVER moves beyond insider debates and tired old arguments (yes, population numbers AND consumption both matter). Framed by essays from population experts Eileen Crist and William Ryerson, as well as a forward by human rights activist Musimbi Kanyoro, the heart of OVER is a series of photo essays illuminating the depth of the damage that human numbers and behavior have caused to the Earth - and which threatens humanity's future.

Tom Butler is the editorial projects director of the Foundation for Deep Ecology and the president of the Northeast Wilderness Trust. A conservationist and writer, his books include "Wildlands Philanthropy, Plundering Appalachia, Keeping the Wild," and "Energy: Over-Development and the Delusion of Endless Growth." Musimbi Kanyoro is a Kenyan human rights advocate. She has been the CEO and President of the Global Fund for Women since August 2011. She is a leading champion for human rights, the health of women and girls, and social-change-centred philanthropy. Kanyoro's international experience in the field of sexual and reproductive health and rights spans more than three decades. Prior to her current position, she was the director of the Population and Reproductive Health program of the David and Lucile Packard Foundation. William N. Ryerson is founder and president of Population Media Center and also serves as Chair and CEO of The Population Institute in Washington, DC. He has a 40-year history of working in the field of reproductive health, including two decades of experience adapting the Sabido methodology of social change communications to various cultural settings worldwide. He lives in Shelburne, VT. Eileen Crist teaches in the Department of Science and Technology in Society at Virginia Tech, where she is advisor for the undergraduate program, Humanities, Science, and Environment. A leading thinker about the relationship between humans and nature, she is author of Images of Animals: Anthropomorphism and Animal Mind and coeditor of Gaia in Turmoil and Life on the Brink: Environmentalists Confront Overpopulation. She lives in Blacksburg, VA.