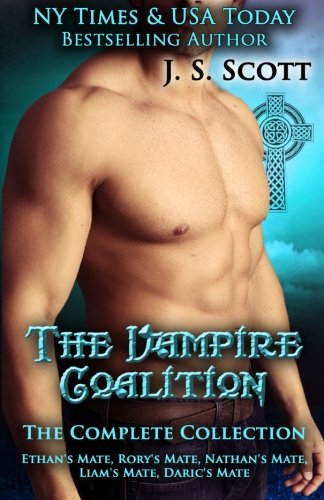 This complete boxed set of The Vampire Coalition includes: Ethan's Mate: Ethan Hale is a vampire with a mission. Together with his three brothers and a few other unmated members, he fights with The Vampire Coalition to protect humans from fallen vampires. His life is fairly simple. If he has a problem...he solves it. If it's an evil problem...he kills it. But his uncomplicated life is about to end when his mate unexpectedly calls him to her. Brianna Cole is weak, her life force fading away. She thinks she is suffering from a rare form of leukemia. Little does she knows that her illness is much more complicated. She's dying because she has not united with her vampire mate and given him his soul that she has been guarding since birth. Rory's Mate: Callie Marks never knew that when she had caught the bouquet at her best friend’s wedding...she would also meet her destiny in the same place. Rory Hale was the nicest, sweetest man she had ever met. He was also the most unattainable. Gorgeous, rich and smart, Rory would never be interested in her. He wouldn’t go for a plump, boring woman that was a chef and suffered from the rejections of her past. Who wanted a foundling that had never even known who her parents were? Little did she know...he was very interested. Unfortunately, he was also a vampire who was ruled by destiny in the mating department. His mate would not be his choice. Rory Hale had liked Callie Marks since he had met her at his brother’s wedding. Although he couldn’t feel desire for anyone except his true mate, he and Callie had a connection. They became cautious friends and he wished he could offer her more. Underneath his confident exterior, Rory had his own insecurities, but Callie seemed to think he was special. Nathan's Mate: Jewelry maker Sasha Taylor is from an old and aristocratic line of mages and expected to mate with a mage of the same background to secure a continuing pure line of little magic children. She would probably have complied with the old mage tradition had she not had one tiny problem with the plan. She had the mark of the vampire that she had hidden for years and was slotted to be a mate to one of the savage species of blood drinkers. Mage and vampires did not mix...so she kept the secret to herself and avoided a mating until she meets her mate, Nathan Hale...a vampire that saves her life. Nathan squashes every myth she has ever heard about vampires and she soon finds herself drawn to the very vampire she had fought so hard to avoid. Liam's Mate: Liam Hale is a vampire healer with secrets, secrets that he has kept hidden for hundreds of years from his brothers for their own protection. He's resigned to his lot in life, to work only for the benefit of his people...until he meets mage healer Regan Taylor. Regan makes Liam want more, much more than a lonely vampire healer can ever possess. Daric's Mate: Prince Daric Carvillius is the twelve hundred year old Prince of the Vampire Healers, the most powerful being on earth, and very accustomed to getting his own way in every situation. When one of his healers, Liam, finds his mate after an entire millennium had passed without one healer mating, Daric is hopeful that the Carvillius Curse is finally broken; the results of a mistake he made a thousand years ago finally righted, allowing healers to find their mates. The only vampire healer he doesn’t want to see mated is himself, positive that the last thing he wants is a female he has to protect in addition to babysitting his unruly lot of vampire healers. But Daric has a destiny to fulfill, and his fate crashes into his life, literally, one snowy night in Colorado when he rescues a female human, Hannah Temple, from a blizzard. Note: This book is not intended for YA readers. The book contains graphic language, explicit sex and other material not suitable for YA readers. As noted above, this is an erotic romance.