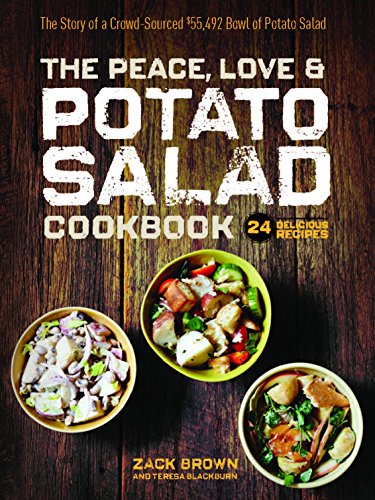 Your picnics will never be the same again. -- Bravo TV's "The Feast" Has (Zack Brown) succeeded in making potato salad cool? This fridge-friendly staple always has been, as the 24 recipes in the book-from the mayo-based classic to an olive, artichoke and feta version-demonstrate decisively. -- Wall Street Journal

What happens when you appeal to Kickstarter to fund your first attempt at making a bowl of potato salad? Well, if you're Zack Brown, you end up raising $55,492, a story that goes viral, a charity-minded "PotatoStock" Festival, and, eventually, a potato salad cookbook for the masses. The Peace, Love & Potato Salad Cookbook is the result of one man's attempt at making potato with the help of the world. Featuring 24 delicious and wide-ranging potato salad recipes, this fun and engaging cookbook is the result of the generous support of the backers who elevated Zack Brown's crowdfunding appeal from a simple, good-humored joke to philanthropic levels covered by Good Morning America, The Today Show, CNN, and the Huffington Post. In an effort to do "the most good that he can," with the Kickstarter funds and his new found fame, Zack's new cookbook will continue to spread the word about "peace, love, & potato salad." Best of all, this tasty collection of potato salad recipes represents the positive change we can accomplish - even from the smallest ideas -- when we all work together.

Buchbeschreibung Hardcover. Zustand: New. Hardcover. The Story of a $55,492 Bowl of Potato Salad In the summer of 2014, what began on a whim as a Kickstarter campaign to raise $10 to make potato salad exploded into one of the most talked-ab.Shipping may be from multiple locations in the US or from the UK, depending on stock availability. 80 pages. Bestandsnummer des Verkäufers 9781940611389