The Death of Dulgath (Riyria Chronicles) 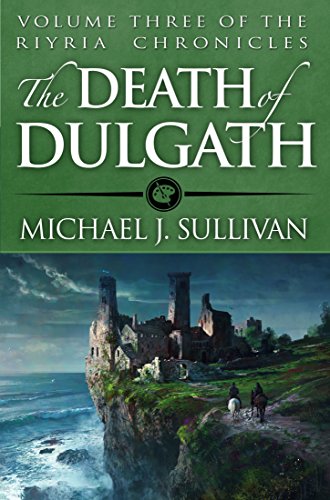 "When the last member of the oldest noble family in Avryn is targeted for assassination, Riyria's Royce and Hadrian are hired to foil the plot. Three years have passed since Hadrian, the war-weary mercenary, and Royce, the cynical ex-assassin, joined forces to become rogues-for-hire. All has gone well until they're asked to help prevent a murder. Now they must venture into an ancient corner of the world to save a mysterious woman who knows more about Royce than is safe, and cares less about herself than is sane.From the best-selling author of The Riyria Revelations comes the third installment of The Riyria Chronicles. Although part of a series, it's designed to thrill both new readers looking for fun, fast-paced fantasy and Riyria veterans wishing to reunite with old friends."

"After finding a manual typewriter in the basement of a friend's house, Michael J. Sullivan inserted a blank piece of paper and typed: It was a dark and stormy night. He was just eight years old and mimicking the greatest (or only) writer he knew at the time...Snoopy. That spark ignited a flame and the desire to fill blank pages would become a life-long obsession. As an adult, Michael spent more than ten years developing his craft by studying authors such as Stephen King, Ernest Hemingway, and John Steinbeck. During that time, he wrote thirteen novels but found no traction in publishing. He did the only sane thing he could think of (since insanity is repeating the same act but expecting a different result), he quit and vowed never to write creatively again.Michael stayed away from writing for a decade and returned to the keyboard in his forties...but with one condition: he wouldn't seek publication. Instead, he wrote a series of books that had been building in his head over his hiatus. His first reading love was fantasy, and his hope was to help foster a love of reading in his then thirteen-year-old daughter, who struggled due to severe dyslexia. After reading the third book of this series, his wife insisted the novels needed to ""get out there."" When Michael refused to jump back onto the query-go-round, she took over the publication tasks and has run ""the business side"" of his writing ever since."

1. The Death of Dulgath (The Riyria Chronicles Book 3)

Buchbeschreibung Mascot Books, 2015. Hardcover. Zustand: Good. Connecting readers with great books since 1972. Used books may not include companion materials, some shelf wear, may contain highlighting/notes, may not include cdrom or access codes. Customer service is our top priority!. Bestandsnummer des Verkäufers S_293534464

2. The Death of Dulgath (The Riyria Chronicles Book 3)

3. The Death of Dulgath (The Riyria Chronicles Book 3)

4. The Death of Dulgath (Riyria Chronicles)

Buchbeschreibung Paperback. Zustand: Very Good. The book has been read, but is in excellent condition. Pages are intact and not marred by notes or highlighting. The spine remains undamaged. Bestandsnummer des Verkäufers GOR008739056

5. The Death of Dulgath (The Riyria Chronicles Book 3)

Buchbeschreibung Mascot Books, 2015. Zustand: Good. A+ Customer service! Satisfaction Guaranteed! Book is in Used-Good condition. Pages and cover are clean and intact. Used items may not include supplementary materials such as CDs or access codes. May show signs of minor shelf wear and contain limited notes and highlighting. Bestandsnummer des Verkäufers 1943363021-2-4

6. The Death of Dulgath (The Riyria Chronicles Book 3)

Buchbeschreibung Mascot Books, 2015. Hardcover. Zustand: GOOD. Has little wear to the cover and pages. Contains some markings such as highlighting and writing. Bestandsnummer des Verkäufers 1943363021_abe_gd