Carpenter, William One Hundred Proofs That the Earth Is Not a Globe

One Hundred Proofs That the Earth Is Not a Globe 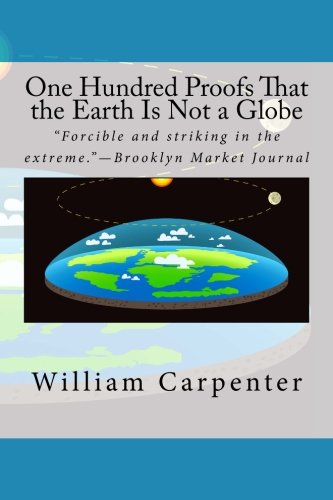 “This can only be described as an extraordinary book .... His arguments are certainly plausible and ingenious, and even the reader who does not agree with him will find a singular interest and fascination in analyzing the ‘one hundred proofs.’... The proofs are set forth in brief, forcible, compact, very clear paragraphs, the meaning of which can be comprehended at a glance.”—Daily News, Sept. 24.

“Throughout the entire work there are discernible traces of a strong and reliant mind, and such reliance as can only have been acquired by unbiassed observation, laborious investigation, and final conviction; and the masterly handling of so profound a theme displays evidence of grave and active researches. There is no groping wildly about in the vagueness of theoretical speculations, no empty hypotheses inflated with baseless assertions and false illustrations, but the practical and perspicuous conclusions of a mind emancipated from the prevailing influences of fashionable credence and popular prejudice, and subordinate only to those principles emanating from reason and common sense.”—H. D. T., Woodberry News, Sept. 26, 1885.

“We do not profess to be able to overthrow any of his ‘Proofs.’ And we must admit, and our readers will be inclined to do the same, that it is certainly a strange thing that Mr. Wm. Carpenter, or anyone else, should be able to bring together ‘One Hundred Proofs’ of anything in the world if that thing is not right, while we keep on asking for one proof, that is really a satisfactory one, on the other side. If these ‘Hundred Proofs’ are nonsense, we cannot prove them to be so, and some of our scientific men had better try their hands, and we think they will try their heads pretty badly into the bargain.”—The Woodberry News, Baltimore, Sept. 19, 1885.

“This is a remarkable pamphlet. The author has the courage of his convictions, and presents them with no little ingenuity, however musty they may appear to nineteenth century readers. He takes for his text a statement of Prof. Proctor’s that ‘The Earth on which we live and move seems to be flat,’ and proceeds with great alacrity to marshal his hundred arguments in proof that it not only seems but is flat, ‘an extended plane, stretched out in all directions away from the central North.’ He enumerates all the reasons offered by scientists for a belief in the rotundity of the earth and evidently to his own complete satisfaction refutes them. He argues that the heavenly bodies were made solely to light this world, that the belief in an infinity of worlds is a monstrous dogma, contrary to Bible teaching, and the great stronghold of the infidel; and that the Church of Rome was right when it threw the whole weight of its influence against Galileo and Copernicus when they taught the revolution of the earth on its axis.”—Michigan Christian Herald, Oct. 15, 1885.

“A highly instructive and very entertaining work .... The book is well worth reading.”—Protector, Baltimore, Oct. 3, 1885.

“The book will be sought after and read with peculiar interest.”—Baltimore Labor Free Press, Oct. 17, 1885.

“Some of them [the proofs] are of sufficient force to demand an answer from the advocates of the popular theory.”—Baltimore Episcopal Methodist, October 28, 1885.

“Forcible and striking in the extreme.”—Brooklyn Market Journal

William Carpenter (February 25, 1830 – September 1, 1896) was an English printer and author, and a proponent of the flat Earth theory, active in England and the United States in the nineteenth century. Carpenter immigrated to the United States and continued his advocacy of the Flat Earth movement. (Wikipedia)

One Hundred Proofs That the Earth Is Not a Globe