Verwandte Artikel zu One Hundred Proofs that the Earth is not a Globe: Flat...

Carpenter, Wm. One Hundred Proofs that the Earth is not a Globe: Flat Earth Theory (The flat Earth Model)

One Hundred Proofs that the Earth is not a Globe: Flat Earth Theory (The flat Earth Model) 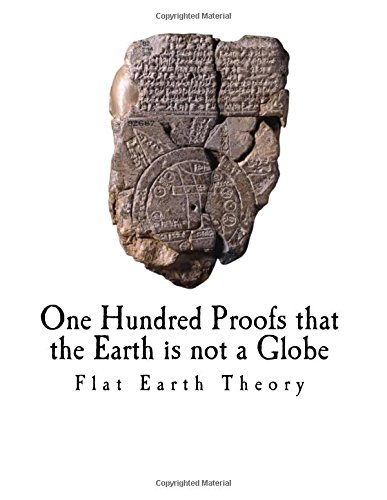 One Hundred Proofs that the Earth is not a Globe

100 Reasons To Prove That The Earth Is Flat

If the Earth were a globe, a small model globe would be the very best—because the truest—thing for the navigator to take to sea with him. But such a thing as that is not known: with such a toy as a guide, the mariner would wreck his ship, of a certainty! This is a proof that Earth is not a globe.

The Suez Canal, which joins the Red Sea with the Mediterranean, is about one hundred miles long; it forms a straight and level surface of water from one end to the other; and no “allowance” for any supposed “curvature” was made in its construction. It is a clear proof that the Earth is not a globe.

The flat Earth model is an archaic conception of Earth's shape as a plane or disk. Many ancient cultures subscribed to a flat Earth cosmography, including Greece until the classical period, the Bronze Age and Iron Age civilizations of the Near East until the Hellenistic period, India until the Gupta period (early centuries AD), and China until the 17th century. That paradigm was also typically held in the aboriginal cultures of the Americas, and the notion of a flat Earth domed by the firmament in the shape of an inverted bowl was common in pre-scientific societies.

Now for the evidence of this grand fact, that other people may know it as well as you: remembering, from first to last, that you have not dared to bring forward a single item from the mass of evidence which is to be found in the “Zetetic Philosophy,” by “Parallax,” a work the influence of which it was the avowed object of your own book to crush!—except that of the three boats, an experiment which you have never tried, and the result of which has never been known, by anyone who has tried it, to be as you say it is!