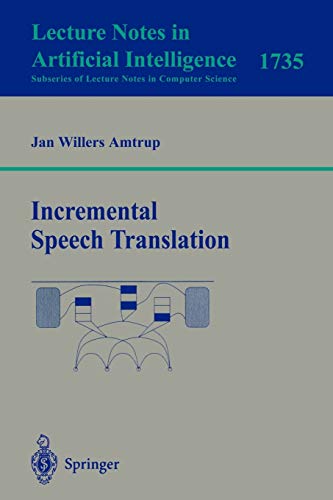 Human language capabilities are based on mental proceduresthat are closely linked to the time domain. Listening, understanding,and reacting, on the one hand, as well as planning,formulating,and speaking,onthe other, are performedin a highlyover lapping manner, thus allowing inter human communication to proceed in a smooth and ?uent way. Although it happens to be the natural mode of human language interaction, in cremental processing is still far from becoming a common feature of today’s lan guage technology. Instead, it will certainly remain one of the big challenges for research activities in the years to come. Usually considered dif?cult to a degree that rendersit almost intractableforpracticalpurposes,incrementallanguageprocessing has recently been attracting a steadily growing interest in the spoken language pro cessing community. Its notorious dif?culty can be attributed mainly to two reasons: Due to the inaccessibility of the right context, global optimization criteria are no longer available. This loss must be compensated for by communicating larger search spaces between system components or by introducing appropriate repair mechanisms. In any case, the complexity of the task can easily grow by an order of magnitude or even more. Incrementality is an almost useless feature as long as it remains a local property of individual system components. The advantages of incremental processing can be effectiveonly if all the componentsof a producer consumerchain consistently adhere to the same pattern of temporal behavior.

This book describes a complete translation system for spontaneously spoken language, constructed using the incremental paradigm. It starts by presenting the theoretical and algorithmic basis necessary to cope with the complex endeavour of translating speech incrementally and in parallel. In particular, graph-theoretic foundations of natural language processing and feature-based descriptions of linguistic objects are covered. A thorough description of the system and its performance follows. The author covers syntactic and semantic processing as well as transfer and syntactic generation. Thus the book can also be used as a broad-coverage introduction to the field of speech translation.
This book is essential reading for researchers and students working in the field of speech translation. It is also intended as a research tool for those interested in the architecture of general natural language processing systems.

Buchbeschreibung Zustand: New. Brand New Original US Edition.We Ship to PO BOX Address also. EXPEDITED shipping option also available for faster delivery.This item may ship fro the US or other locations in India depending on your location and availability. Bestandsnummer des Verkäufers AUDUU-2523