Verwandte Artikel zu Quantum Physics: The Bottom-Up Approach : From the... 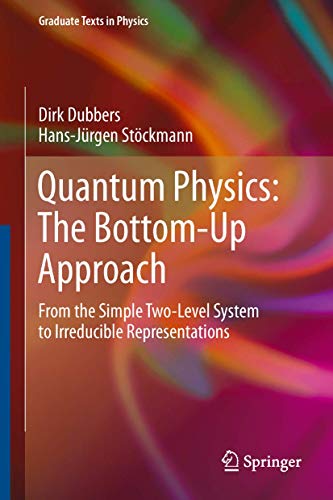 This concise tutorial provides the bachelor student and the practitioner with a short text on quantum physics that allows them to understand a wealth of quantum phenomena based on a compact, well readable, yet still concise and accurate description of nonrelativistic quantum theory. This “quadrature of the circle” is achieved by concentrating first on the simplest quantum system that still displays all basic features of quantum theory, namely, a system with only two quantized energy levels. For most readers it is very helpful to understand such simple systems before slowly proceeding to more demanding topics like particle entanglement, quantum chaos, or the use of irreducible tensors. This tutorial does not intend to replace the standard textbooks on quantum mechanics, but will help the average student to understand them, often for the first time.

H.-J. Stöckmann, born 1945 in Göttingen/Germany, studied physics at the university of Heidelberg where he obtained his PhD in 1972 and the degree of habilitation in 1978. Since 1979 he is professor of experimental physics at the university of Marburg, where he developed the microwave techniques to study experimentally the quantum-mechanical properties of chaotic and disordered systems. He is author of an introductory monograph on quantum chaos.

Buchbeschreibung Springer, 2013. Hardcover. Zustand: New. 2013th. Hardcover. This concise tutorial provides the bachelor student and the practitioner with a short text on quantum physics that allows them to understand a wealth of quantum phenomena base.Shipping may be from our Sydney, NSW warehouse or from our UK or US warehouse, depending on stock availability. 266 pages. 0.553. Bestandsnummer des Verkäufers 9783642310591