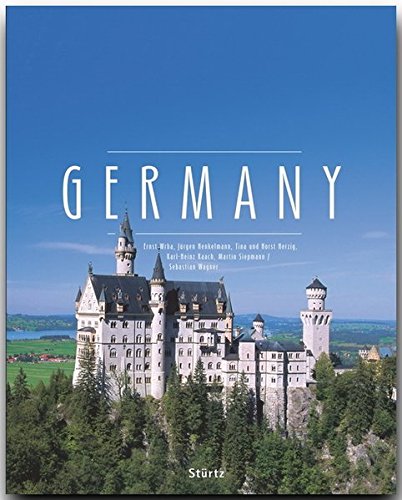 From the Brandenburg Gate and Neuschwanstein Castle to the Hamburg harbor and Munich’s Oktoberfest, this guide highlights the numerous landmarks and festivals to be discovered in Germany. The Dresden Zwinger, Franconia’s half-timber villages, Cologne Cathedral, and countless other churches are also captured along with more than 20,000 castles and fortresses. The country’s patchwork of unique landscapes, picturesque villages, and bustling metropolises is beautifully depicted in these images, and the history of the region’s great poets, architects, and artists as well as their created treasures of German art and culture are presented, surrounded by spectacular natural settings. Celebrating the land’s customs and festivals, this travel companion also follows its famous rivers, such as the Rhine and Danube, and climbs it mountains, from the Zugspitze to the Watzmann. Additional features comment on the construction of medieval castles, the most powerful trade organization of the Middle Ages the Hanseatic League, on King Ludwig II and his fairy tale castles, and on two stimulants that are equally popular wine and beer.

Buchbeschreibung Verlagshaus Wurzburg, 2011. Zustand: Good. A+ Customer service! Satisfaction Guaranteed! Book is in Used-Good condition. Pages and cover are clean and intact. Used items may not include supplementary materials such as CDs or access codes. May show signs of minor shelf wear and contain limited notes and highlighting. Bestandsnummer des Verkõufers 3800317524-2-4

Buchbeschreibung Verlagshaus Wurzburg, 2011. Hardcover. Zustand: GOOD. Has little wear to the cover and pages. Contains some markings such as highlighting and writing. Bestandsnummer des Verkõufers 3800317524_abe_gd