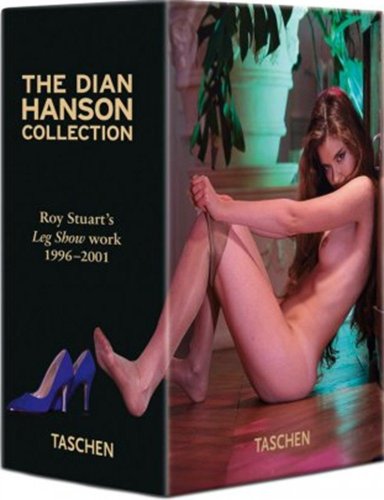 In 1993, Roy Stuart began producing monthly photo stories for "Leg Show" magazine, working closely with then-editor Dian Hanson to tailor his work to the magazine's demanding audience - fetishists with many diverse interests including bare feet, high heels, all manner of modern and vintage lingerie, voyeurism, female dominance, and body hair. Some of these interests, like body hair and panties, dovetailed nicely with Stuart's own tastes, while others were a less comfortable fit, as Stuart was never actually a fan of the complex wardrobe beloved by "Leg Show" readers and provided by Hanson each month. Nevertheless, despite disagreements and outright battles, they managed to work together until August 2001, during which time Stuart produced what many consider his finest work. The five little books in this boxed set contain a selection of 34 stories created for "Leg Show" between 1995 and 2001. For the first time, each story is presented full length and complete, for a total of 960 pages of uncensored Roy Stuart. Consider it the ultimate gift of love, and remember that loving starts with loving oneself.

Dian Hanson is a twenty-five-year veteran of men's magazine publishing. She began her career at Puritan Magazine in 1976 and went on to edit a variety of titles, including Partner, Oui, Hooker, Outlaw Biker, and Juggs magazines. In 1987 she took over the '60s title Leg Show and transformed it into the world's best-selling fetish publication. Most recently, she authored TASCHEN's Terryworld, Tom of Finland: The Comic Collection and Dian Hanson's History of Men's Magazines six-volume set.