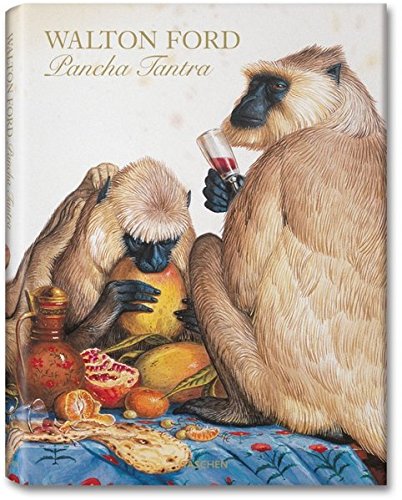 This book features a natural selection: Ford's beautifully savage beasts and birds. Walton Ford's watercolors of animals could be mistaken for 19th century natural science illustrations or British colonial paintings. Except they're not. Something strange and usually sinister is happening in each of Ford's works, whether it's a wild turkey crushing a small parrot with its claw, a collection of monkeys wreaking havoc on a formally set dinner table, or an American buffalo surrounded by a pack of bloodied white wolves...in the middle of a proper French garden. Painted with the deft technique of a technical artist, Ford's works vibrate with an intensity of uncanny familiarity; they are both reassuring in style and disturbing in content. With titles like "Au Revoir Zaire", "Necropolis", and "Dirty Dick Burton's Aide de Camp", and "Space Monkey", his paintings open the doors to a world of real-life fantasy, dreams, and nightmares - all with a stunning candor that almost belies the artist's intentions. Collected together for the first time as a limited-edition book, and now available as a popular edition, Ford's bestiary takes its name from one of the texts he frequently refers back to in his work: "The Pancha Tantra", the ancient Indian book of animal fables collected from 3rd-5th Centuries B.C. and considered to be the precursor to "Aesop's Fables". This book provides an in-depth exploration of Walton Ford's oeuvre. It also includes a complete professional biography as well as substantial excerpts from the textual sources for the paintings, from Vietnamese folktales and the letters of Benjamin Franklin to the "Autobiography of Benvenuto Cellini" and John James Audubon's "Ornithological Biography".

Walton Ford grew up in Westchester County, New York, in a family of gifted storytellers. As a child he was an amateur naturalist - collecting animals, hiking, fishing, and devoting much of his free time to examining and drawing the dioramas and specimens at the American Museum of Natural History in New York City. He completed his studies in filmmaking at the Rhode Island School of Design in 1982, but soon adapted his talent for storytelling to painting. His life-size watercolors, which at first glance appear to be in the vein of 19th-century natural-history painters like John J. Audubon or Edward Lear, are actually complexly layered fantasies depicting wild animals in unnatural settings and situations, and cite textual sources ranging from the letters of Benjamin Franklin to the journals of Leonardo da Vinci. Ford lived in New York City for most of the 1980s and '90s - home base for personally and professional influential travels to countries including Italy, India, and Mexico - and for some years supported himself as a wood refinisher, carpenter, metalworker, and illustrator, while developing his craft and audience. His work has been exhibited widely since 1987 at private galleries and public institutions including The Whitney Museum, The Brooklyn Museum, the Paul Kasmin Gallery in New York, Michael Cohn Gallery in Los Angeles. He has been awarded a John Simon Guggenheim fellowship and grants from the National Endowment for the Arts and the New York Foundation for the Arts, among others. He now lives, works, and hikes in the Berkshire Hills of Massachusetts. Bill Buford was the fiction editor of the New Yorker for eight years, where he first came upon Walton Ford's work to illustrate some of the stories he published. He is now a New Yorker staff writer. He was also the founding editor of Granta and has written two books, Among the Thugs and Heat: An Amateur's Adventures as a Kitchen Slave, Line Cook, Pasta Maker, and Apprentice to a Dante-Quoting Butcher in Tuscany. He lives in New York City with his wife Jessica Green, and their two sons.