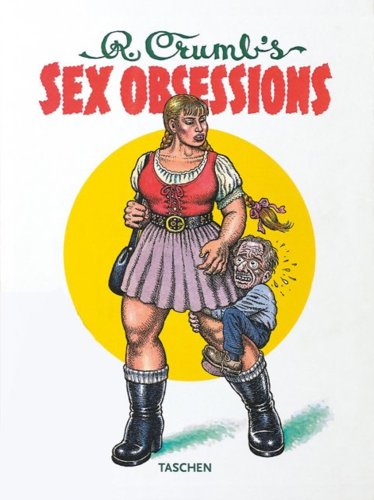 "This one's a top-shelfer. Mr. R. Crumb has been sketching the cheekiest comic strips for years and this book is a compilation of his best. From 1980 - 2006 it's a witty and sexy guide to his mucky antics." 10 Magazine, London"

'Somehow the Devil got me'. Crumb's personal selection of his most secret fantasies, colored here just for Taschen. They have little to do with the standard procreative urge, Mr. Crumb admits. He has also said he finds nothing more boring than someone else's sexual obsessions, and yet through his long career the world's most famous underground cartoonist has felt compelled to include his own sex fantasies in his art. He explains it as a compulsive catharsis, while fans call R. Crumb's erotic fantasies the Master at his best. Now Crumb has selected his most intimately revealing comic strips and single page drawings to create a 258 page encyclopedic trip through his sexual psyche. All images were created between 1980 and 2006, and all strips are hand-colored for a lush vibrancy never seen in his comic books. In total the book features 14 complete stories, including "My Troubles With Women", "If I Were a King", "A Bitchin' Bod", and "How To Have Fun With a Strong Girl", as well as 60 single page drawings. The artist admits it's a little scary to see his most fevered obsessions collected end to end like this, but fans will find "Robert Crumb's Sex Obsessions" a fascinating peek inside an often tortured, always brilliantly talented mind. This unlimited popular edition is for readers on a budget or who were unable to get their hands on the original limited Art Edition.