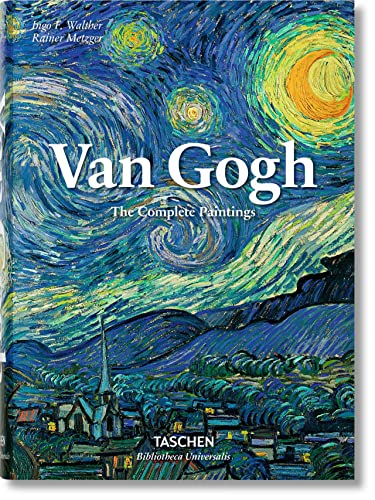 Vincent van Gogh's story is one of the most ironic in art history. Today, he is celebrated the world over as one of the most important painters of all time, recognized with sell-out shows, feted museums, and record prices of tens of millions of dollars at auction. Yet as he was painting the canvases that would subsequently become these sell-out modern masterpieces, van Gogh was battling not only the disinterest of his contemporary audiences but also devastating bouts of mental illness, with episodes of depression and paralyzing anxiety which would eventually claim his life in 1890, when he committed suicide shortly after his 37th birthday. This comprehensive study of Vincent van Gogh (1853-1890) pairs a detailed monograph on his life and art with a complete catalogue of his 871 paintings.

Rainer Metzger studied art history, history, and German literature in Munich and Augsburg. In 1994, he earned his Ph.D. on the subject of Dan Graham, and subsequently worked as a fine arts journalist for the Viennese newspaper Der Standard. He has written numerous books on art, including volumes on van Gogh and Chagall. Since 2004, he has worked as Professor of art history at the Academy of Fine Arts in Karlsruhe. Ingo F. Walther (1940-2007) was born in Berlin and studied medieval studies, literature, and art history in Frankfurt am Main and Munich. He published numerous books on the art of the Middle Ages and of the 19th and 20th centuries. Walther's many titles for TASCHEN include Vincent van Gogh, Pablo Picasso, Art of the 20th Century, and Codices illustres.

Buchbeschreibung PAPERBACK. Zustand: New. Book Cover and ISBN may be different from US edition but contents as same US Edition. Excellent Quality,Quick delivery by USPS/UPS/FEDEX/DHL/ARAMEX, We may ship the books from Asian regions for inventory purpose. Our courier service is not available at PO BOX. Bestandsnummer des Verkäufers nt_9783836557153