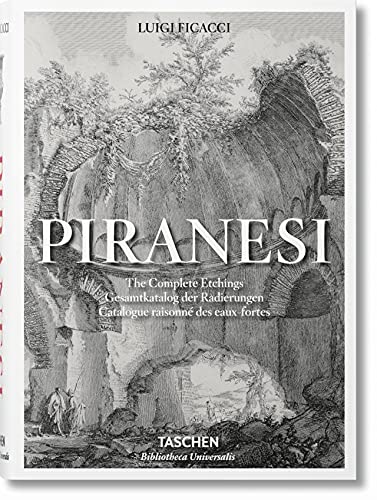 Archaeology and imagination Impossible staircases and startling ruins from Italy’s master engraver The most famous 18th-century copper engraver, Giovanni Battista Piranesi (1720–1778) made his name with etchings of ancient Rome. His startling, chiaroscuro images imbued the city's archaeological ruins with drama and romance and became favorite souvenirs for the Grand Tourists who travelled Italy in pursuit of classical culture and education. Today, Piranesi is renowned not just for shaping the European imagination of Rome, but also for his elaborate series of fanciful prisons, Carceri, which have influenced generations of creatives since, from the Surrealists to Samuel Taylor Coleridge, Edgar Allan Poe, Jorge Luis Borges and Franz Kafka. Loosely based on contemporary stage sets rather than the actual dingy dungeons of Piranesi's day, these intricate images defy architectural reality to play instead with perspective, lighting, and scale. Staircases exist on two planes simultaneously; vast, vaulted ceilings seem to soar up to the heavens; interior and exterior distinctions collapse. With a low viewpoint and small, fragile figures, the prison scenes become monstrous mega-cities of incarceration, celebrated to this day as masterworks of existentialist drama. About the series: Bibliotheca Universalis — Compact cultural companions celebrating the eclectic TASCHEN universe at an unbeatable, democratic price! Since we started our work as cultural archaeologists in 1980, the name TASCHEN has become synonymous with accessible, open-minded publishing. Bibliotheca Universalis brings together nearly 100 of our all-time favorite titles in a neat new format so you can curate your own affordable library of art, anthropology, and aphrodisia. Bookworm’s delight — never bore, always excite!

Luigi Ficacci studied art history in Rome under Giulio Carlo Argan. For many years, he was curator at the Istituto Nazionale per la Grafica in Rome and lectured at various Italian universities. From 2007 to 2015, he was Bologna’s general museum director (Soprintendente ai Beni Culturali); today he is general museum director in Lucca. The focal points of his research work are the issues raised by 17th and 18th century and contemporary Italian and European art.

Buchbeschreibung Zustand: New. The most famous 18th-century copper engraver, Giovanni Battista Piranesi (1720-1778) made his name with etchings of ancient Rome. His startling, chiaroscuro images imbued the city's archaeological ru.Shipping may be from multiple locations in the US or from the UK, depending on stock availability. 856 pages. 1.366. Bestandsnummer des Verkšufers 9783836559409